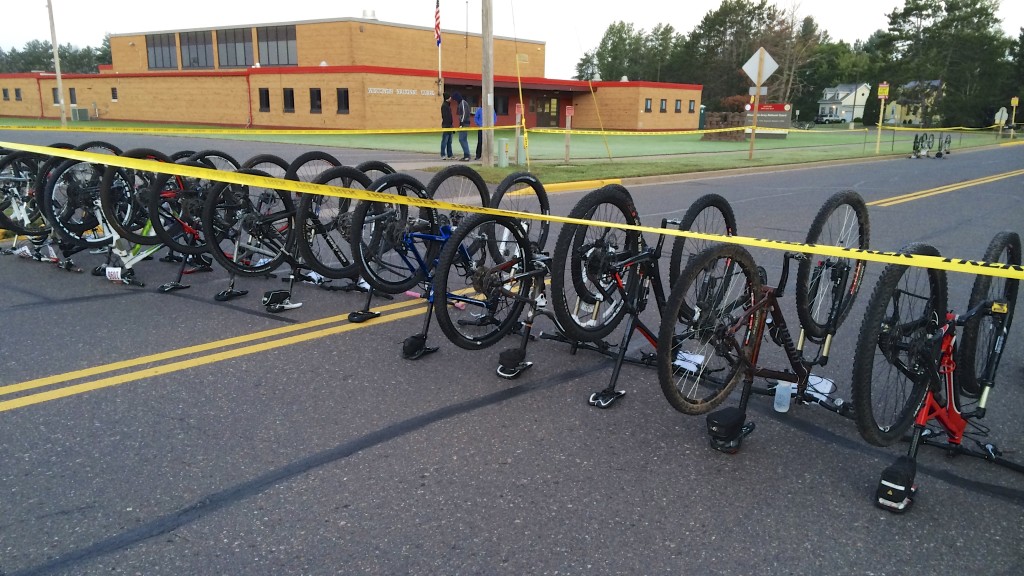 It was one heck of a cold morning…

Last year, I started in gate 7 and finished in 3 hours and 12 minutes, which gave me a gate 5 starting position this year. I headed down to the start gates around 6:30 a.m. and staged my bike at the start of gate 5. It wasn’t a huge advantage, but I’ll take anything I can get as I am trying to work my way up through the ranks.

I was not really feeling my greatest at the start line. I just felt tired and I really couldn’t get my legs to warm up and stretch well. But, there I was. The cannon went off and the waiting for the role out to start moving back in the cheap seats of gate 5 had begun. As with any mass start event, especially this one with over 2,000 people, it is a little messy. I kept myself clear of danger and only had one close call when somebody in front of me “brake checked” a little hard, but no contact was made.

When we made a left onto the trail system, the pace damn near stopped, as 2 paved lanes of bicycle traffic made a left onto the narrow ski trails climb. I had to get out of this mess. I made some progress across Rosie’s Field and then around mile 5, the big bottleneck happened around a major mud hole.

I was getting really hot and decided I would rip off my leg and arm warmers here, since I had to get off the bike and do some standing and walking through the bottleneck anyways. I should have never put the warmers on that morning. I didn’t lose much time, as things were bottlenecked pretty bad.

Once I got through the bottleneck, traffic thinned out a little and I could move decently fast. I still wasn’t feeling that great all the way through 10 to 12 miles. I hadn’t really been able to get my heart rate to settle down the first 10 miles, except for when I was waiting to get through the bottleneck around the mud hole. I backed off a tad and tried to focus on getting my heart rate relaxed a bit. I had been running my heart rate above 170 and knew that I needed to get it down around 160 to avoid burn out.

It took a couple of miles, but I was able to get things settled down and get back on the hammer. I mentioned this at the beginning of the year, but I’ll say it again, I need to work on my leg strength. I can spin up a pretty high cadence on a flat, but I’m still struggling on laying down the power in a climb. I am going to have to start doing some hill repeats or something to build some hill climbing power. I can granny gear it up just about anything, but I just don’t have the uphill speed that I need. I know this is also an area where I could make up a lot of time in the Lutsen 99er, on the first long climb up Caribou Lane.

I hammered down the downhills and flats and played it conservative on the climbs. We hit a little bit of single track and I just fell in line and used this to recover a little. The group I was with at this time was working through the single track pretty good.

We finally made it to Fire Tower climb, where it was a little congested. There was a line on the right that was walking and a line on the left that was climbing. I dropped to granny gear and fell in behind the guy in front of me. I was feeling good. I could tell the guy in front of me was struggling and I knew if he didn’t make it, that I wasn’t going to have much space to get around and through the congestion. I wasn’t feeling good enough to cut up the middle though and keep my balance, so I opted to yell out encouragement to the guy in front of me to “stay in it”. He let me by at the top of the first section and thanked me for the encouragement. I chuckled, because I knew it was all for my own self preservation.

I shifted up a couple gears in the flat before hitting the rest of Fire Tower, which turned out to be a mistake. I got about 15 feet up the second section and shifted my chain right into my spokes when trying to drop back into granny gear. That being said, I was able to pull my chain out and get right back on and finish the climb. Now, I had a rush of adrenaline going. I made it up the climb without walking and I was within 10 miles of the finish. I came off the top of Fire Tower and poured on the heat. I knew I wasted some time at the beginning trying to work my way up from gate 5 and then getting held up at the big mud hole bottleneck, but I was mostly surround by bibs with gate 3 on them now.

I ended up coming across the finish in 2 hrs and 39 minutes. This was 33 minutes faster than last year. You could make the argument that the course was a few minutes faster this year, since they cut out just over a mile because of the storm damaged trails. I believe that would be true for the leaders that were out in front of the congestion, but I feel like the bottleneck at the big mud hole, more than made up for it.

I am really looking forward to next years racing season, expanding my race schedule and finding my way closer to the podium, if not on it. Life is short and it is never too late for anything. I got a new trainer to spin on for the winter and will be ready at a higher level next year!