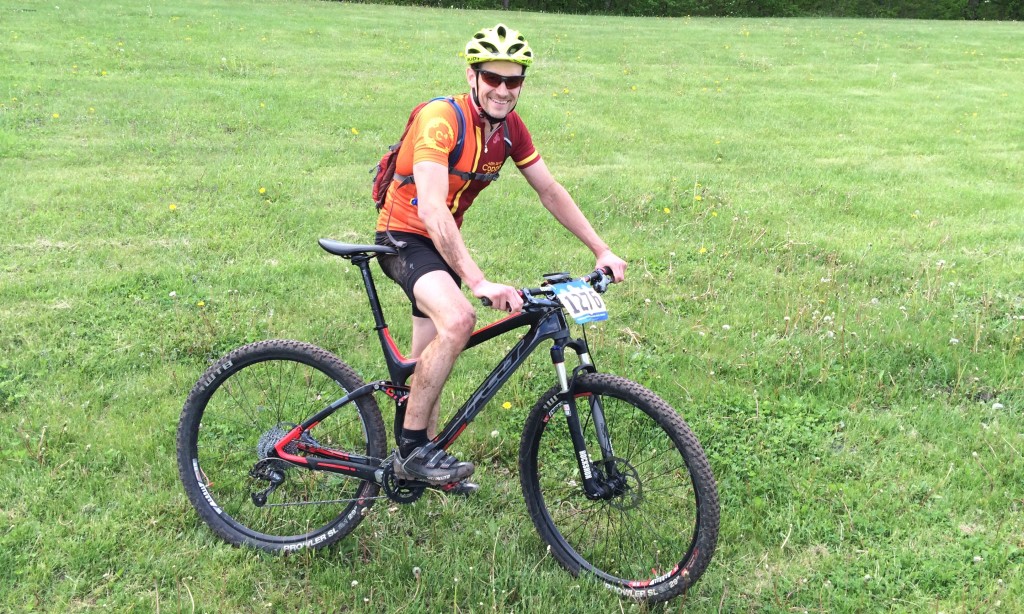 I’ll preface this article by saying that this race was a mechanical disaster for me with a couple other mishaps, but I still finished.  I started out the morning by not even planning to head to the race, when I woke up to thunderstorms.  As I kept watching the weather and after getting a text from a buddy, I found out that it hadn’t rained much over to St. Croix Falls.  So there I was scrambling to pack up and get over there.  This would be my first time racing in the Comp class and I was curious to see how I would do against the competition.

There I was at the start line, not really feeling all that great to begin with and the race was on.  I immediately was hearing rattling from the rear of my bike and we weren’t even 50 yards from the start line.  My brakes were good, suspension felt fine…  I didn’t know what it could be and I didn’t want to stop yet, so I kept pressing on and fell into the back of the line as we headed into West Ridge, the more advanced / technical section on the Woolly trails.  I was feeling comfortable enough to pass the guy in front of me and hang on the wheel of the next guy up.

I made it up the climbs in decent shape and hammered on the pedals as we left West Ridge.  We were dropped out into the open area and then on to a connector trail over to the paved bike path.  Aside from my tires being low profile and low rolling resistant tires, they were ready to be replaced as the knobs were all rounded off.  I pushed it too hard in the connector trail and completely washed out the front end and down I went.  I brushed the mud off me and took a look at the rear of the bike to see what the rattling was.

I found that the entire rear gear set was loose.  This was totally my fault.  I had removed it from the rear wheel to make a bearing adjustment and must not have final torqued it.  I’ll chalk this up to the kids distracting me in the garage or something as I surely couldn’t be that irresponsible…  I hadn’t had the bike on the trail till now and only down some asphalt a couple miles since putting the rear wheel back on, so I hadn’t noticed the issue before.  I figured there wasn’t much I could do at this point and decided to press on as long as it didn’t come completely loose.

Things didn’t end there…  Less than a mile later, as I shifted up a couple gears for a short climb, my rear derailer sucked right into my spokes.  I jumped off the bike to find that my derailer hanger was bent with my derailer wrapped up in my spokes.  I must have bent the hanger when I crashed.  I quickly struggled with the chain and derailer to pull them out of the spokes and then straightened out the derailer hanger the best I could.  Since I was stopped, I figured I would assess the situation of the loose gear set.  I tried to tighten it by hand the best I could and reassembled the wheel to the bike.  It was still loose, but I figured it would not back all the way out.  I had lost a lot of time at this point and the next wave of riders had caught and passed me now. 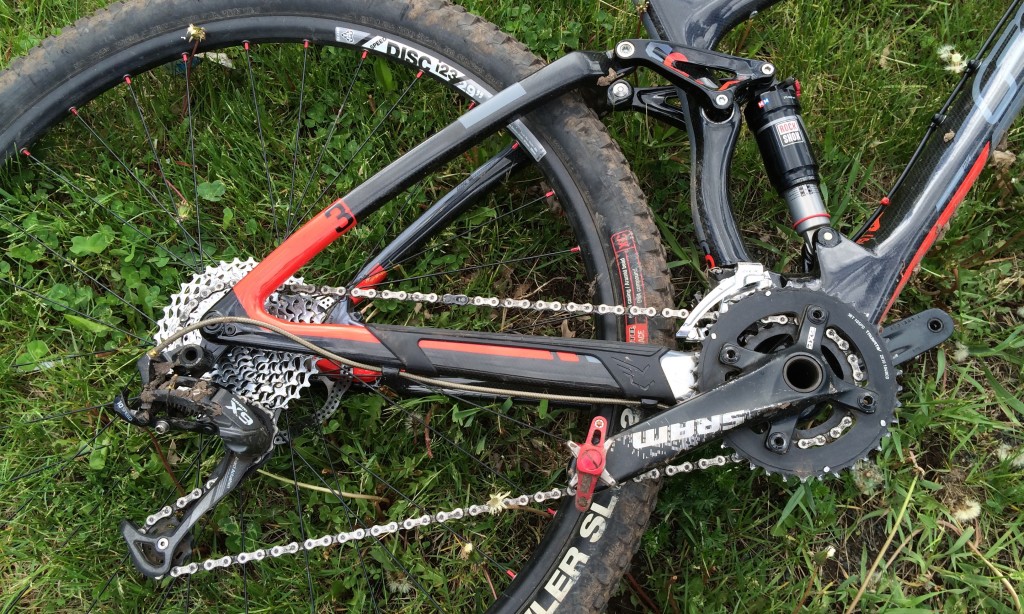 I was scrambling now, I hadn’t even gotten through the first lap of the race and had lost a lot of time I was pushing the heart rate to much to try and get back on.  I almost decided to drop out of the race at this point.  My bike wouldn’t shift worth a darn or hold the gear that I put it in and the rear cassette was rattling like a tin can of bolts.  I couldn’t quite though, I wanted to see what I could do in the Comp class.  This was my early season gauge to see where I stood.  I kept on and told myself I would finish.

Once I got going again, I was riding ok.  The shifting was driving me nuts, and I couldn’t really find the right gear ever.  I made it through the first lap and headed back into West Ridge again.  There I was headed up the last big climb when I heard a big “POP” and then some additional rattling.  I quickly pulled off to find a broken spoke hanging off the rim and my wheel very much untrue.  I was able to unthread the spoke and jumped back on yet again.  The rear wheel was wobbling pretty good, but I just wanted to finish at this point.

My mechanical events were over  now, aside from having to ride with the aftermath of not being able to hold a gear and my rear wheel wobbling.  I wasn’t even half way through the race yet.  My next issue, is that I didn’t pack any food.  This was a mistake and about an hour and a half into the race, I was getting hungry.  I could feel the fatigue setting into the legs and they needed some fuel.  I was unprepared.

I entered West Ridge for the start of lap 3, the final lap, with some pretty fatigued legs that were in need of fuel that I didn’t have.  I pushed on and had to walk it up one of the climbs.  I knew that I just needed to get through these climbs and the rest was fairly manageable.  I was definitely feeling it at this point and just wanted to finish.  I got a bit of a second wind coming through the downhills on Erratic Rock and Big Oak.  I gave it everything I had left to get around the soccer fields and across the finish line.

At the end of the day, I ended up 7th place out of 8 guys in my age group and 42nd out of 54 guys in the overall Comp class.  I actually feel pretty decent about it, given all of my mechanical issues and crashing.  I figured without those issue, I was at least in the hunt of mid pack and could hang with the Comp Class group to a certain degree.  Although I do have some work to do, I can improve and work from this baseline.  I really need to continue to work on the endurance of my leg strength.  I also learned that I definitely need to be prepared to take in at least a 100 calories every hour when I get to the Lutsen 99er and Maah Daah Hey 100.

Thanks for reading.  We all have bad days and bad races.  I hope this inspires you to keep pressing on the next time you are having a bad day or bad race.  Until next time…  Keep hammering on those pedals.