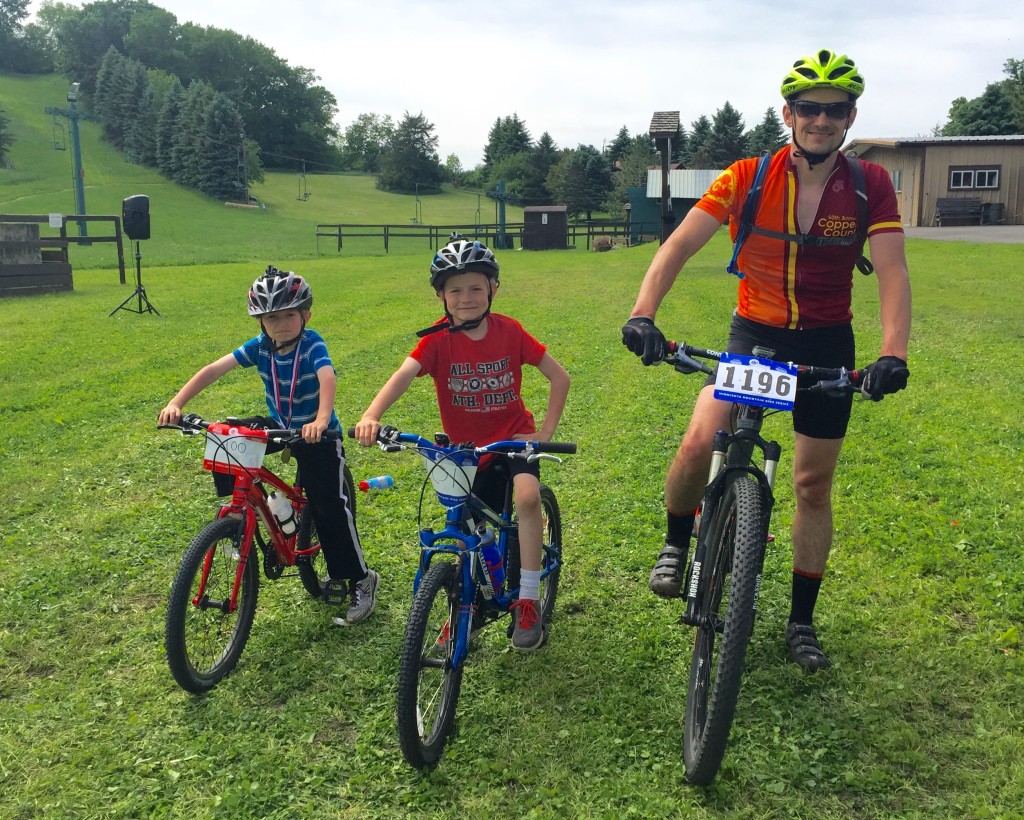 I’ll start out by saying that I am really glad that I pre-rode the course on Saturday.  I’ve never ridden Mt. Kato before and there were a few technical sections on the Comp course that would have taken me by surprise.  We hauled our camper down to Mankato Friday evening and camped at Land of Memories City Campground for the weekend.  It is a nice little park and we were not the only racers that had the same idea.

When I did my shake down ride at Carver Lake on Thursday, I was starting to have some rear brake problems.  They were squealing and there wasn’t much modulation, they were either not braking or locked up.  After messing with them on Saturday morning, I decided to stop by Nicollet Bike Shop in Mankato for some new rear brake pads.

This turned out to be a really nice shop.  They took care of me pretty quick.  They installed the new pads for me, adjusted the brake levers, calipers and also made a head set adjustment.  Within a few minutes, the bike felt like new again.  This is also where I got the tip about the tight left hander and a few other sections of trail and decided I should go ahead and pre-ride.

I did 2 laps of pre-riding on Saturday and couldn’t figure out how to safely ride the tight lefty.  I decided I would go “Cyclocross style” during the race and do the “hike a bike”.  The pre-ride gave me a good opportunity to figure out my strategy.  I figured the big climb wasn’t really the tough part.  The tough part was some of the mid course section climbs with tight switchback that were pretty steep.  There was also a downhill section that was a little sketchy to get down and required a bit of hanging off the back of the saddle to get down.  A dropper seat post would definitely have been handy here.

I was feeling pretty good after the pre-ride.  My brakes were great, but I had this creak in my frame that was really getting to me.  I had thought it was the cable ferrules rubbing in the frame stops when the suspension was working, but that wasn’t the case.  The bottom bracket felt solid.  I eventually found my main rear pivot bolt was a little under torqued.  I had checked it once already and it seemed fine, but after backing it out I realized it wasn’t torque enough.  I backed it all the way out and separated the joint.  I cleaned everything up, put some Phil Wood Grease on the bolt and put it back together.  This solved the problem.  Now the bike really felt like a new bike again and I was pumped.

There I was at the start line thinking about where I should fall into line on the big climb that begins only about 100 yards from the start.  As we hit the climb, I dropped in line 2nd from the back of my age group starting heat.  I am still learning where I stand in the pack and decided there was no sense in blowing myself up on the first climb as I had 4 laps to do.  I actually felt a bit held back and if I remember correctly, I ended up going around another guy toward the top of the climb.  Once you get to the top, there is some nice single track to roll on.

I kept feeling like I could go faster, but I figured I would hang on the wheel in front of me for now.  We dumped into the the single track of cedar climb and started to get bunched up.  I was feeling pretty strong with the climbs and wanted to pass.  The guy in front of me missed the left hand turn into Mad Squirrel and I was able to get some open trail.  I dismounted for the tight left hander and got back on the pedals smoothly.  I caught the next pack of racers in the switch back climbs.  I had to dismount at one point because the guy in front of me bailed in one of the tight climbs and I couldn’t get around.  I jumped off quickly and ran my bike up the trail about 10 yards and got back in it.

This took some energy out of me and I needed to settle my heart rate down.  At this point, a couple of the lead guys from the 40 to 49 year old age group had caught and passed me.  I hope I keep getting faster as I get older too…  I was on the wheel in front of me through the switchbacks of Dead Horse and was able to fly through the Maze at a decent speed before hitting the Staircase Climb back to the top.  I made up another spot on the climb.  I had a clear trail in front of me for Ridge Run and was able to carry some speed.

I popped out on to Cabin Run to finish out my first lap right at the 26 minute mark.  I was feeling pretty good and the bike was functioning well.  I made it up the climb just as well as the first time up.  At this point, I had figured out the sections where I could make up time.  I traditionally haven’t been the strongest climber, but I have definitely improved.  I held back a little on the big climbs and made up some time in the flowing single track.

Here is a nice picture of my son cheering me up the climb! 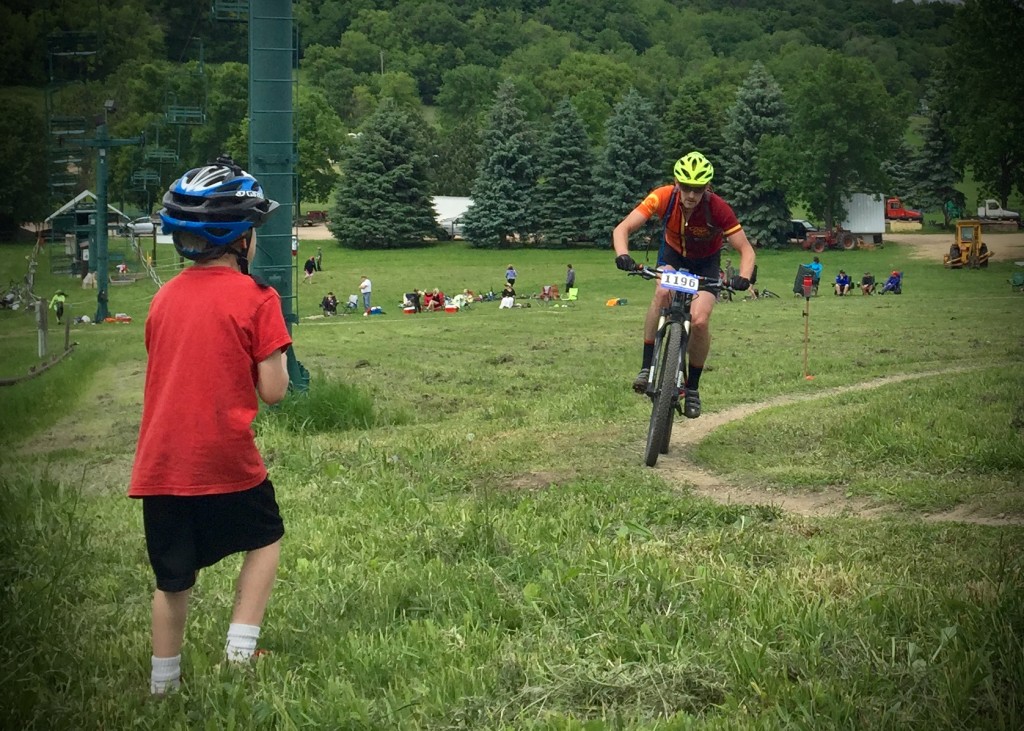 When I came around to start lap 3, I was starting to feel the pain a bit and was struggling to get in my head that I was only half way through the race.  This is where the mental game starts.  I pushed through and spun and easy gear up Kato Climb and recovered a bit.  My cardio was feeling good but the legs were starting to burn on the climbs.  All that being said, I made it through lap 3 and picked up another spot or 2.

I was a little more aggressive going up Kato Climb on lap 4, but knew that I still had to get through Cedar Climb and Staircase.  I hammered in the flats again, but did struggled on Staircase where I lost 2 spots in my age group.  I didn’t lose sight and stretched myself out on Ridge Run a bit and was able to pick 1 of the spots back up coming down Cabin Run into the finish line. 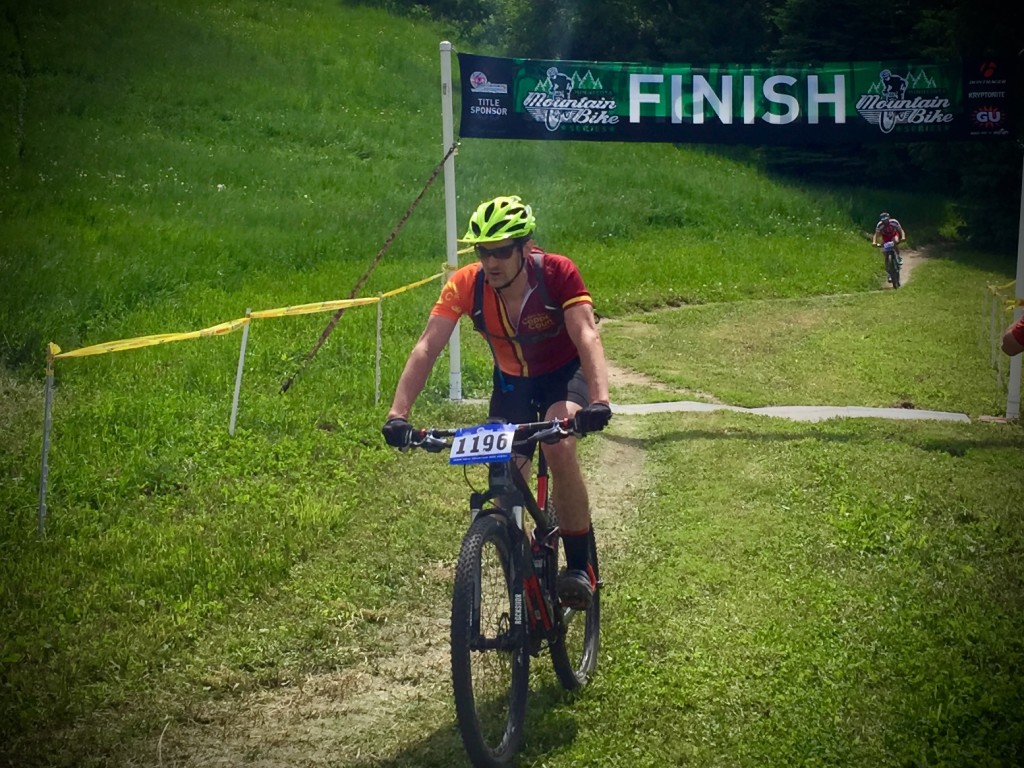 I was pretty happy with the race.  I raced my race and didn’t get caught up in anybody else’s game.  My 4 lap splits were all within 12 seconds of each other.  I feel good about racing in the Comp Class after this and will only improve from here.  That being said, this may be my last race until the Lutsen 99er and I will most likely concentrate on training over the next 3 weeks before taking an easy week before the Lutsen to recover.

Even though I still have a lot of room for improvement, I do feel stronger on the climbs and more confident in the technical sections.  I also have to mention that, it is in fact, a little bit about the bike…  My bike functioned well and in much better shape than at the Woolly Race, which provided for a much smoother and confident ride.  I did switch to a tubeless wheel and tire assembly, which dropped some weight and my new tires are gripping much better than the old ones.  Having a good functioning bike and some new treads was helpful.

I also took in some calories during the race this time.  I learned from the last race that I needed some food.  I took 1 packet of Honey Stinger Energy Chews in my jersey pocket that totaled 160 calories.  I had 2 or 3 of the chews each lap.  This was just enough to keep a few calories coming in and not feel any hunger.  If the race was any longer, then I definitely would have needed some additional calories on top of this.  About a hour and a half before the race, I ate a sweet potato.  I may plan on the sweet potato again in the future.

Also, I have to mention that the kids had a great time doing the short Kid’s Fun Race.  They were very excited for their medals and have set their sights on the Kid’s Comp Race for next year.  I think it is great that the Minnesota Mountain Bike Series puts this together.

Thanks for taking the time to read through and please pass this along if you enjoyed it.  Until next time… stay focused and keep hammering on! 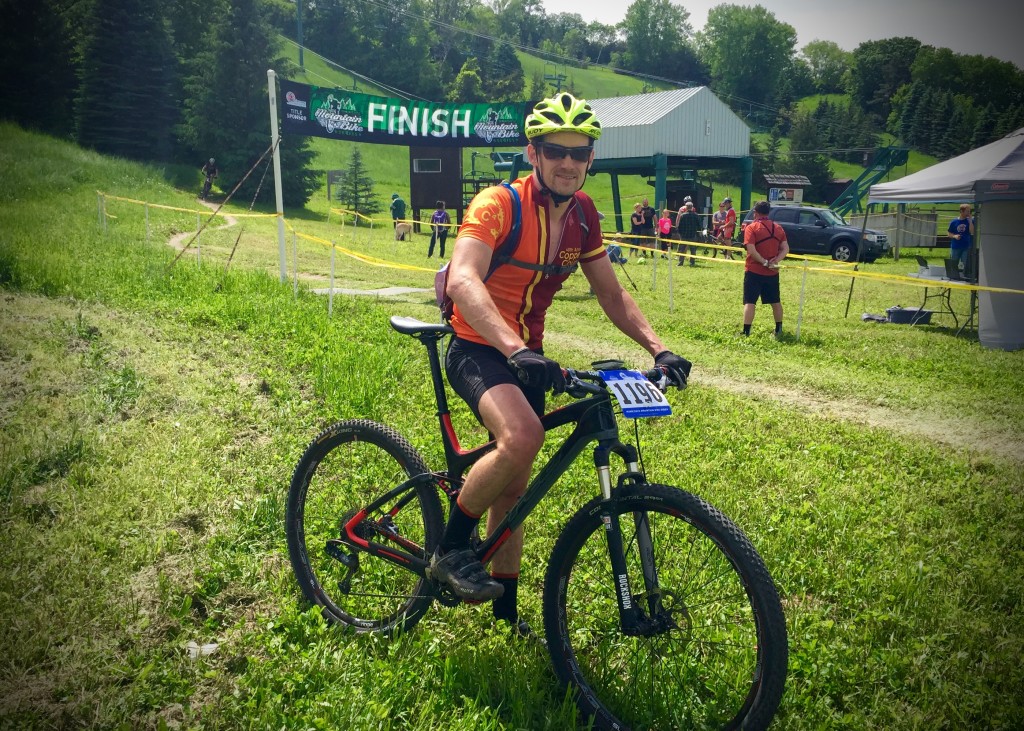