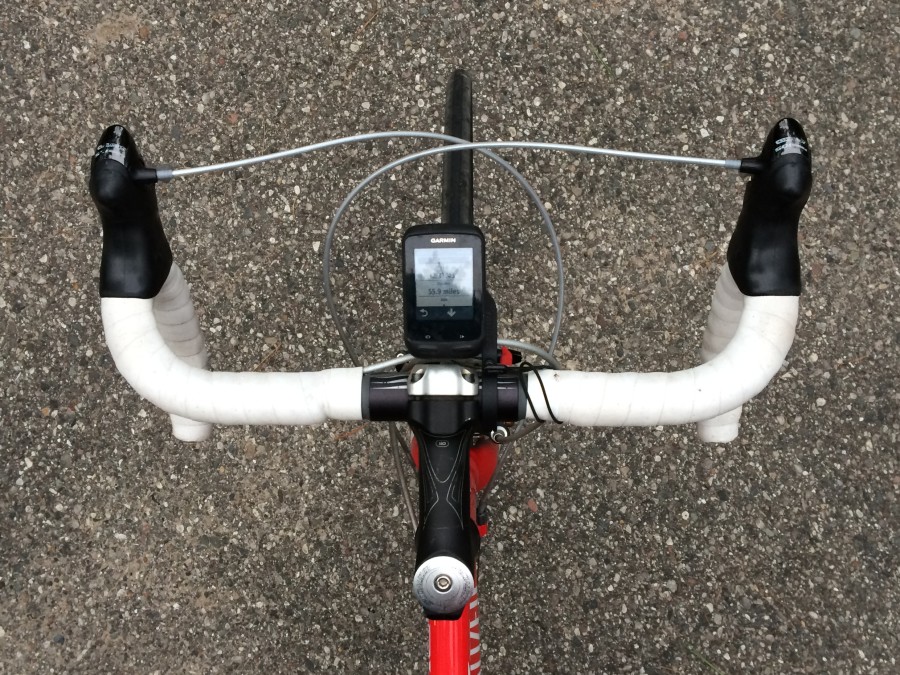 I looked around at the rest of the starting field to realize my hairy legs were sticking out like a Sasquatch in a nudist colony and asked the guy next to me if this was in fact the Cat 4/5 group and not the Cat 1/2/3 group.  I had done some Crit racing and 2 other road races this year as training for my main events of the year…  The Lutsen 99er, Maah Daah Hey 100 and the Chequamegon 40, but I was still impressed by the seriousness and commitment of the Cat 4/5 group that I was racing with.

I still really have no idea how to race well in a pack and I struggle with the drafting and riding so close to the other riders who seem to always be moving around.  The race would be a 3 lap race for a total of 54 miles.  There were some rolling hills in the first stretch of the lap with a nice climb to each lap finish and the finish line.  I had become quite a bit more confident in my climbing abilities since the spring where I had been dropped or struggled in climbs.

We took off from the start line in a nice easy rollout for the first couple of miles before starting to race.  I tried to hang in the draft as much as possible, but struggled as it always seemed like I was getting bucked out of line as some of the local shop teams were working together with pretty tight lines.  I still didn’t really know what I was doing or should be doing within the pack.  I was not looking for a free ride and have no problem doing some work, but I was trying to stay smart as well.

I was getting extremely frustrated as it seemed like the pace was constantly changing.  I am not used to tapping the brakes unless I am about to hurl myself off the side of a steep bench cut to the bottom of a ravine, but it seemed like a must in order to stay in the pack.  We made it around to the first climb and things started to spread out heading up the hill.  I held my own and hung with the lead group as I did not want to get separated.  It was a bit frustrating as it seemed like I would put the hammer down on the hills or coming out of a corner to make sure I did not lose the lead riders and miss a break away, but would find the peloton still there and feeling like I just wasted a bunch of energy.

We hit the rollers at the start of lap 2 and my frustration was building with the on and off the brakes and then rapid pedaling just to tap the brakes again.  Again, I just haven’t figured out how to ride in those packs.  I am used to mountain bike racing where we have a short distance at the start of the race, where you get a bit backed up in the trail and then after that you just get out there and work your ass off for the rest of the race.  There is a bit of drafting in a few of the gravel sections of the Lutsen 99er, but never any massive packs like this with people moving all over the place.

About half way through the second lap, my frustration got the best of me and I worked my way toward the front and ended up taking a long pull into a head wind.  I was working hard, but was starting to have fun again.  I actually felt like I was racing now and enjoyed getting out there and putting in some work.  I pulled off eventually and let somebody else take a pull.  One of the other riders came by and said “Thank you for taking a pull”.  We hit the climb at the end of the second lap and things blew up a bit amongst the pack and I made it up the climb with the first few guys.  It appeared for a second that a few might try to take off, but nothing ever organized and everybody got back together again.

I was sitting about 10 back when we hit the rollers.  It seemed like some were starting to struggle getting up the rollers and 5 or 6 guys in the front were starting to pour on the heat.  A gap started to form going up the second hill and I put everything I had into the pedals to split the short gap that was starting to form. I looked back as we crested the hill to find that we had dropped the peloton and were making a legitimate gap.

The break away didn’t know that we had a gap yet and some of them starting peeling back.  I yelled to them that I was the last guy and that we had dropped the main group.  I found myself taking pulls in the front to help maintain this gap, but we could not get organized enough and were quickly caught by the peloton.  Knowing that the field was starting to weaken, I stayed out front with a couple other guys and we kept pushing.  I didn’t know if this was the right thing to do or not, but I was hoping we could get a little break away going as we were within 8 to 10 miles of the finish at this point.  We again spent a lot of energy and couldn’t get organized well to make something happen.

We turned the corner to start heading into the wind and I found myself out front again in the headwind.  I was spent by this time after the hard pulls over the last 5 + miles, and was looking to jump back in the draft.  I peeled off to the right and slowed down, but nobody came up.  Either nobody wanted to work or everybody was spent like I was.  I didn’t know which was the case, but I wasn’t pulling anymore.  We were down to 17 mph and I heard somebody yell from the back “Go! We’re only going 17 mph”.  I find it funny, how somebody is always wanting to go faster, but not willing to do the work.  I yelled back, “Come on up!”.  Nothing, but crickets…

Eventually, a line of riders worked past on the left and I started dropping back as we made another right hand turn and were now in a cross wind.  I quickly found myself getting sucked backwards and could not get in line.  By the time we were approaching the final climb to the finish, I had dropped further than mid pack and the pace started picking up fast.  I knew I was in a crappy position and wasn’t quite sure what to do.  I should have pushed myself up through the pack earlier, but I was a little spent from the hard pulls and was concerned now about the final climb.

We hit the climb and I started picking my way back through the pack.  We made the left hand turn to the finish of the climb where I picked off a few more spots, but I was way too far back when we hit the climb.  I ended up coming across the finish line 29 seconds after the leader, in 20th position within the overall Cat 4/5 field and 7th among the Cat 5 field.  I was disappointed and frustrated.  I gave everything on that final climb, but I got beat.  Even though I got a bad start up the hill, the leaders had obviously put some space between them and I getting up that final climb.

I hung out to watch the podium awards and chuckled a bit as I heard somebody complaining to his buddies about how slow we were going at some point as he told them “we were down to 17 mph”, I assumed he was the guy sitting in the middle of the pack yelling at other people to go faster…

Road racing is a bit odd to me.  Mountain biking is my main sport and I got into Road racing this year to try it out and feed my addiction for competition and racing along with some early season training for my big mountain bike races.  In mountain bike races, I am used to going out and working hard from start to finish.  Even when we we’re taking pulls in the Lutsen 99er, you were still working your tail off in the back of the line just to stay on.  Granted, the pace lines in the Lutsen were usually only 4 to 6 people anyways and we were rolling gravel on full suspension mountain bikes.

I am still not sure what to think of the road racing.  My heart is for sure in the endurance events and the Maah Daah Hey 100 was a great example of the type of racing that I will probably focus on going forward.  I was getting pretty frustrated, sitting in mid pack with the on and off the brakes and non steady pace.  I was actually sitting there thinking, why the hell am I doing this, as it just wasn’t any fun.  I couldn’t take any more of it, which is why I worked toward the front and started taking pulls.  It was way more fun hammering the pedals and putting some work in.  That is when the road racing got fun again.  I’ll keep at it, as this was my first year doing it and I feel like I can make some progress.  I just don’t know what I am doing out there in the pack and need to figure out how to race a smart race.

I have the Chequamegon 40 Fat Tire Festival left to do in September, but I am working on lining up a good race schedule for next year that will mostly be focused on endurance mountain bike events.  I will throw some road races in the schedule if they fit, but they won’t be my priority.  I got into racing because I liked pushing my body to its limit and I just haven’t gotten that feeling or excitement yet out of the 2 hour road races.  Some of this may not sit well with the roadies, but I write this to share my experiences whether they be good or bad.  I would be curious to hear feedback on this from other people that jump back and forth between the various racing disciplines.  Regardless, I do like racing and am looking for a few other races to potentially add to the schedule yet this fall.  Until next time, keep on pedaling…