I have not raced any bikes since crossing the finish line of the Chequamegon 40 about 3 months ago and I am looking forward to my first fat bike race, the Great Lakes Fat Bike Series opener, Solstice Chase on Saturday.  Since the Chequamegon, I have been mostly “Just Riding Along” at low intensity with the exception of a couple rides.  I am feeling pretty good now, after putting in a lot of low intensity miles in the last couple of months.  I feel healthier and stronger for sure.  I think I have a better base built up than what I did prior to the Lutsen 99er and I am interested to see how I feel with a 2 hour high intensity pull at the Solstice Chase Fat Bike race Saturday.

I have heard that Jeff Hall will be at the Solstice Chase, as I am sure there will be a few other top riders.  I finished the Chequamegon 40 almost 30 minutes behind the winner Jeff Hall, which equates to losing about 45 seconds of time per mile.  That is a lot of time.  I’ll be fairly happy if I can keep myself within 20 minutes of the winner Saturday, especially since I have not been doing barely any high intensity riding and been focused on base building for endurance training.  I’d feel really great if I could keep within 10 minutes. Regardless, I’ll give it my all. 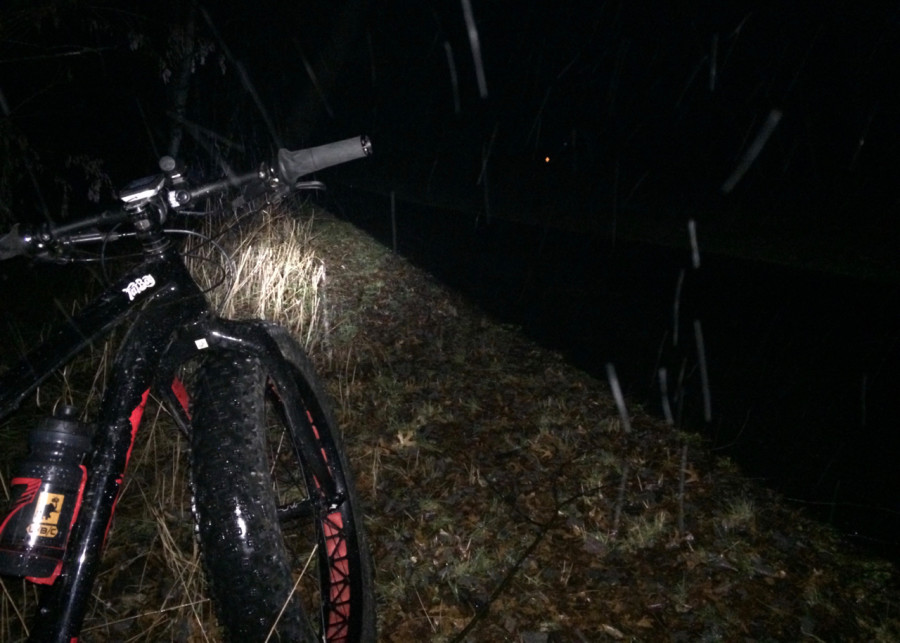 I’ll be riding a 2015 Specialized Fatboy Expert that is now tubeless on the stock rims and tires.  It’s an aluminum frame with a decent build for the money.  When I bought the bike, I wanted a frame that could fit a 5 inch tire, which narrowed down my choices a bit.  Now that I am going into my first race with it, I kind of wish I had lighter 3.8 inch tires and narrower rims on it.  The rims are 100mm rims, so it would be a bit awkward trying to narrow down the tires without getting new rims.  Like I mentioned, I did manage to go tubeless with the stock set up and some Scotch Tough Guard tape on the rims.

I’ve also put a longer inverted stem on it and swapped the riser bars for flat bars to try and get a better XC riding position.  The bike is still over 30 pounds, but feels pretty good.  I’ve never ridden 3.8 inch tires to know the rolling resistance difference, but I do know the Specialized Ground Control Tires that are on my bike now have some pretty good knobs on them.  I’ll find out Saturday how it rolls in comparison to the other guys in the pack.

I am still working out my winter racing gear and the weather has not been favorable to do so.  I’ve only ridden once or twice in sub 30 degree temps this year and it looks like it will be in the 20s on Saturday.  I just purchased the Craft Extreme base layer from Performance Bike and was able to try it out last night on a little shake down ride.  I am going to try and get away with that as a base layer with another light long sleeve as a middle layer under a regular summer jersey.  If I don’t think that will be warm enough, then I have a cold season runners outer layer to wear also.  I probably won’t make the final call until Saturday morning, just before the race starts.  I didn’t want to go purchase too much gear before doing my first race and really finding out what I needed.  I was hoping for colder weather this December so that I could work it all out prior to racing, but no such luck.

I also purchased a pair of Pearl Izumi Lobster Gloves from Performance Bike at the same time.  I’ve been real happy with the durability of Pearl Izumi gloves in the past.  I currently have a set of Bar Mitts on the bike and they do help.  I’ve used them with just my summer vented gloves, but at temps in the 20s, I do need more glove under them.  I have the small/medium size Bar Mitts and they do feel a bit restrictive at times and I think it will be even worse with the Pearl Izumi Lobster Gloves.  The velcro to the handlebar on the Bar Mitts also bothers me.   I wish I would have gotten the larger size Bar Mitts.  They are much cheaper than the other options on the market and do help, but the small/medium size are just to constrictive for me.  I am probably going to give the Lobster Gloves a try without the Bar Mitts.  Again, I probably won’t make this call until Saturday morning either.

I usually ride with a hydration pack, but I am dropping the hydration pack for this race and going with bottles.  I think 2 bottles will be enough to get me through the race.  I plan to rely on a few Honey Stinger Gels taped to my top tube for fuel.  I know it will be a bit cold for them, but I plan to stick one of those stick on toe warmers to my top tube underneath them and I think that will keep them from getting too thick in the cold.  I’ll let you know in my post race report how this works out.

I do think I am all set on boots.  I purchased a pair of Lake 303s back in October and I think they will work out just fine.  My feet were only cold in them once, but that is because my feet were frozen before I put them on.  My feet warmed up after 40 minutes or so.  I had started that ride with my summer shoes and covers and ended up stopping by my car to switch into the boots.  I think for weather in the 20s, they may actually be a little warm with high intensity racing, but I just don’t think covers over my summer shoes will cut it.

I did a little shake down ride on the paved bike path last night to check over the bike and try out the new gloves and base layer.  The bike is ready to go other than chain lube and maybe another seat adjustment that I will sort out tomorrow.  I recently swapped seats and put a longer seat post on it.  I can’t find my wet chain lube and will probably run over to Cyclova tomorrow to pick up some chain lube and my number plate at the same time.  Maybe, I’ll take my bike with me and be able to take a quick lap around the Woolly trails as long as the ground is frozen, which is looking to be the case.

Look for my Solstice Chase race report next week and please say hi, if you see me at the race.  I don’t think we’ll have more than a dusting of snow on the ground, but knowing some of the gang involved in putting the race on, it will be a really fun day regardless.

← Why And How To Find Heart Rate Threshold For Cycling2015 Solstice Chase Fat Bike Race Report, Results And Video →