I’ll start by saying that Cuyuna Whiteout was one of the most fun races I have done.  I have built up an interest for endurance races recently, because I like point to point or single lap races.  I get bored easily and like to keep things new and I just do not get too excited about lap races, which is probably why I have started to shy away from XC events.  That being said, I loved this race.  It was a shorter XC style race at about 18 miles, but all in one lap with a mix of single track and wide bike path.  I really enjoyed it and am looking forward to next year’s Cuyuna Whiteout already.

The event schedule was fantastic with a mid-day race.  I was able to drive up in the morning before the race and still have plenty of time to get ready.  The parking area at Cuyuna is really awesome for the event also.  I have made 3 day trips and a 4 day camping trip to Cuyuna in the past, so I do have some familiarity with the trail system and was curious how the race would be looped together.  It turned out to be a really great course layout; probably the most fun short course layout I have raced. 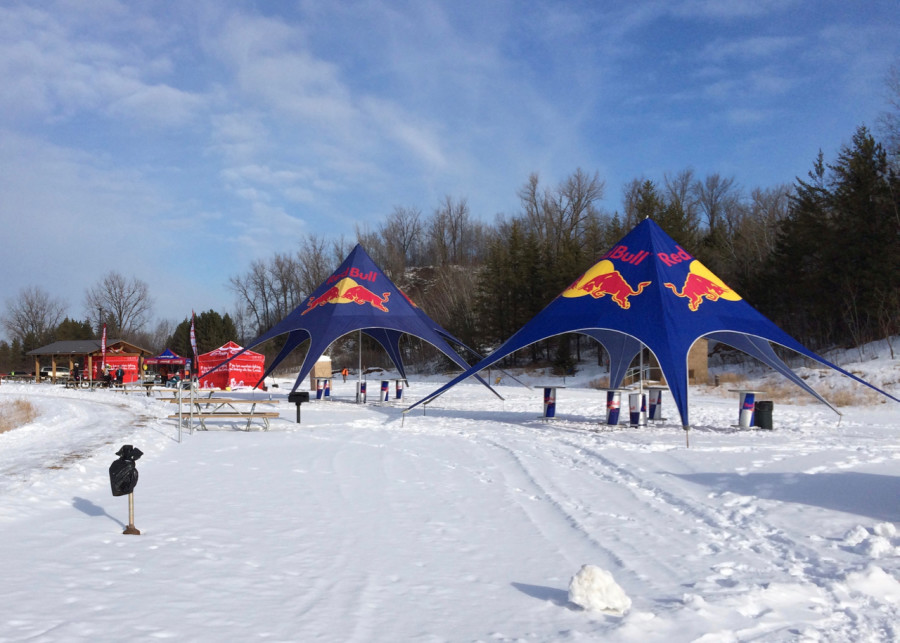 I started in Wave 1 behind the Great Lakes Fat Bike Series Gate.  The first right hand turn to enter the Cuyuna Lakes State Trail, which is a paved bike path in the summer, was terribly congested, soft and rutted up; forcing many people off their bikes and making the trail conditions and congestion even worse for racers coming behind us.  However, I did manage to stay clipped in for most of it, picking my way through the traffic and finding myself in a good position out in front of the main congestion as we started to spread out down the bike path.

The Cuyuna State Trail continued to have a lot of soft spots with random ruts and I was very happy about letting some air out of my front tire before the race start.  I have no idea how much pressure I was running as I have stopped checking the pressure and have been going by feel lately.  Basically, I let enough air out that when I stood over the bike and put my weight on the handlebars, the side knobs would touch down on the ground.  I moved up the rail trail portion at a really good pace, falling in line behind a few other riders about half way to the start of the single track.

We made a right hand turn onto Overburden Road before entering the Little Sidewinder single track trail.  When I hit the single track, I could see I had had a nice gap behind me and gave myself some space to the riders in front of me so I could ride my own pace.  They were moving at a nice clip and there was no need for me to ride their wheel.  The first section of single track was packed well and even though it was a little slick, it was not nearly as slick as it would turn later in the race.

I picked up 1 place somewhere between Little Sidewinder and Hopper Hill and then another somewhere along the Drag Line Trail, as the trail cut through an open parking area.  I could continue to hear riders behind me in chase and also see riders in front of me.  As the race continued, the trail became more slick and I found myself sliding around a bit more and becoming more cautious.  I was caught by Jason Kunshier, from Woolly Bike Club, around Grizzly Trail area as he was shredding through the single track like an XC Pro and he quickly dropped me once I pulled off to let him by.

When I hit the Haul Road Trail, I knew I was in the home stretch, but played it a little conservative as I was sliding around a bit.  For some reason I thought we would take the Cuyuna Lake’s State Trail all the way to the finish once we left the haul road and crossed highway 6.  I figured I could let it ripped and make some time back up then.  I crossed highway 6 and started to let loose up the bike path to find that we still had more single track.  I was cruising through this single track at an aggressive pace as I knew I had another rider inching his way up to me on Haul Road Trail and didn’t want to lose any spots in the final part of the race.

At one point, my front tire took a slide and got caught in a rut on the edge of trail and I buried my right shoulder and side of my head into a tree.  The tree didn’t move and it hurt.  I swear the last 3 or 4 times I have crashed my bike, it was my right shoulder that took the brunt of it.  Just when I think it is about to heal up, I hit another tree somewhere or slam it into the ground.  I am sold now that studded tires are worth it, but I’ll probably still wait till next year.  The tree incident is actually about 5 seconds before the battery died in my GoPro if your interested in checking it out.  Not much to see really, except for me letting out a couple of groans.

I popped back out onto the Cuyuna Lake’s State Trail and put the hammer down.  The trail was soft and I swear it was a bit of a false flat for the first section, but I was still moving at a good clip.  I made the right hand turn for the final pull to the finish line, finishing in 27th place overall in 1 hour, 41 minutes and 50 seconds. 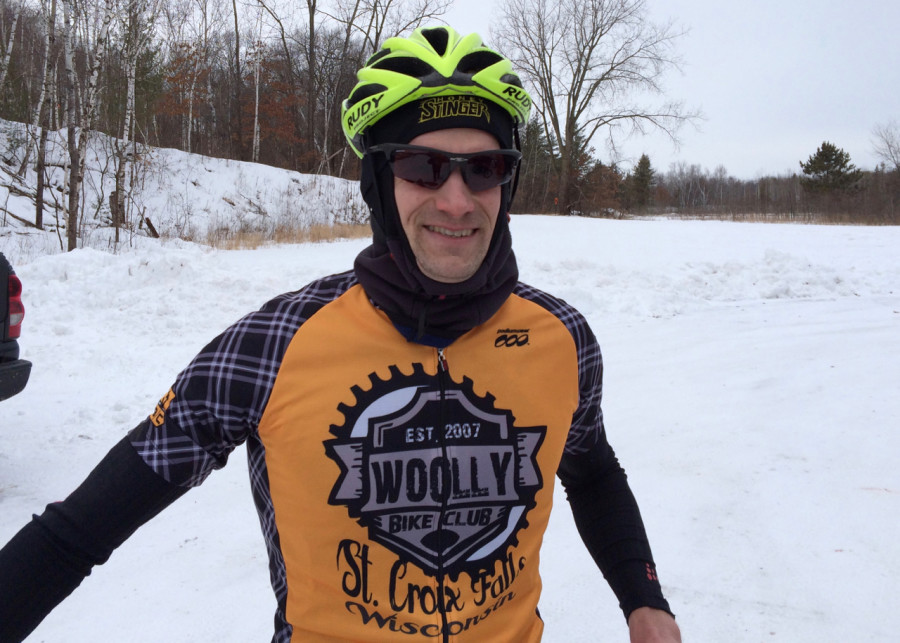 I felt really good and everything worked well.  I tend to have a high threshold, or so I think…  My heart rate averaged 164 bpm over the duration of the race and peaked out at 179 bpm.  I didn’t really look down at my Garmin to much and just tried to ride by how I felt.  I was actually a little surprised to see such a high average heart rate, because I didn’t feel like I was taxing myself out.  I did well on the State Trail sections and made good time up the climbs, but felt a bit traction limited in some of the slick single track.

All said and done, it was a great race and I really enjoyed racing the Cuyuna Whiteout.  I am definitely looking forward to the rest of the Great Lakes Fat Bike Series Races yet to come this winter.  Frozen Forty is up next and will be quite a bit more time in the saddle.  I do not plan to go out and get studded tires for it, but it looks like we’ll get some fresh snow on the ground before the race to support some good trail conditions.

It was warm enough for me to use my summer Pearl Izumi ELITE Gel-Vent Full Finger Gloves inside my Bar Mitts without even thinking of getting cold.  In fact, my hands actually sweat a little during the race.  I did drop a loose hand warmer in each of the Bar Mitts that I was able to hold on to as I was waiting for the race to start and then just let it roll loose inside the Bar Mitts after that.

I did get a new hydration pack from Ogio; the Ersberg 70.  I really like.  It is slim and the shoulder straps are a fairly wide mesh and sit perfect around my chest and shoulders.  I barely feel it on.  It doesn’t hold much gear, but was perfect for this race.

I put 4 Honey Stinger Gels in a 150ml SoftFlask with some water and that worked out really well.  I started with it in my back jersey pocket, but was able to fit it inside my Bar Mitts after taking a few shots out of it.  I will probably get a second one of these for longer races.

I didn’t have any back problems, but I still feel a little crunched up on the medium frame.  I might be able to push the seat back slightly, but I honestly don’t think I will change a thing before Frozen Forty.

Missing the last 3 miles.  Battery went dead at the 15 mile mark, ironically about 5 seconds after I slid into a tree.

I used 4 gels for the race that I had put into a soft gel flask with some water.  This worked out great.

I really like my new Ogio hydration pack.  It’s really slim and the shoulder straps are formed perfect around my chest.  I barely even feel the pack on.

My helmet and sunglasses worked out great.  I like the red tinted glasses on overcast days.  It was above freezing, so there was no need to use my goggles.