I have already kicked off my Great Lakes Fat Bike Series racing with the Solstice Chase race back in December.  But that was 7 weeks ago and the Cuyuna Whiteout, 2 days from now, will kick off 3 weekends of back to back Fat Bike racing that will include the Frozen Forty and 906 Polar Roll.  I will have a weekend off after the 906 Polar roll before wrapping up the Great Lakes Fat Bike Series with the Fat Bike Birkie. The Fat Bike Birkie may likely end up being just a ride for me instead of racing, since the True Grit 100 is the following weekend.

Below is a bit of breakdown on my thoughts for each Great Lakes Series Fat Bike race coming up.

Cuyuna Whiteout is a shorter race at about 18 miles and much shorter and higher intensity than what I have been training for.  That being said, it just might be short enough for me to hang at high intensity without burning out before the finish.  Regardless, we are about to find out.  I have found, I do much better with an easy rollout and warm up as I work into the race.  Every race that I have gone out hard from the start line, ends up kicking me in the tail sometime before the finish.

Cuyuna is just short enough, that maybe I can get away with it.  The thing is, it is short enough that if you don’t go out hard with the leaders, you won’t have a chance at making up ground and they’ll be gone.  I’ve never hung with the lead pack of racers anyways for more than a couple miles in any event.  Even in that, I was not really with them, but only had them in sight as they disappeared in the distance.  One of these days, I hope to get there.

I have made 3 day trips to Cuyuna in the past and also spent a 4 day camping trip there; so I am somewhat familiar with the trails.  I have never raced at Cuyuna and am mostly excited to finally race on the trails and support the Cuyuna Trail System.  I know they put a lot of hard work into the trails.  I am interested to see how they loop the course together for the race as most of the trail loops are really short, so I suspect a big connection of trails to pull the full race course together.

There is also an after party that I plan to attend.  It should be a really fun day.  Regardless of how the racing goes.  You can’t beat a day on the trail with people sharing the same interests followed up by hanging out with some music, food and a cold beverage.

The Frozen Forty is a little more on par with my pace as that race will take me anywhere between 4 to 5 hours and I am probably planning on a 4 hour and 20 minute race, depending on trail conditions.  Quite frankly, I would be real happy with a 4 hour and 20 minute race.  That’s about an hour and 4 minutes per lap with a minute to refuel each lap.  I feel like an hour and 5 minute lap in the winter is pushing the traction and effort limits for me over 4 laps and am amazed at the times that the fast guys have put down in the past Frozen Forty races.  The winners of this race are obvious beasts with great bike handling skills and I have to assume are sprinting out of every corner.  I will probably settle into my own comfortable pace to get started and ease my way into this race a lap at a time.

At 40 miles, the Frozen Forty is far from a winter ultra, but it definitely is a long distance race.  It is a bit unique in that it is 40 miles of single track vs ski and snowmobile trails and you are not stuck out in the wilderness, even though it is a 40 mile race.  It is 4 laps with many places to bail if you get in trouble with your gear vs an ultra race where you could be 10 to 20 miles from shelter.  I think it is a could test of being out on the snowy trail for hours.

I hope to carry all my fuel with me for the Frozen Forty, so I don’t have to make any major stops.  Elm Creek is a bit of a hard trail to refuel on while riding, but I did recently order a gel flask to put all my gels in and will try to get by with fueling on gels alone.  I am also curious how far and long I can make it on gels alone.  I consider this season a good testing season to try out different nutrition strategies prior to hitting the 100 milers this year.  The Frozen Forty will be my longest Fat Bike race and will be another good test on my cold weather gear.

The 906 Polar Roll is probably the one I am most excited about as it will take me to Marquette, Michigan and is a point to point race.  I get bored quickly and like to ride new trails, so point to point races or races with one big loop are a little more interesting to me.  Plus, this race looks to have a mix of single track and wide snowmobile type trail and will definitely keep things interesting.  It also looks to be a big festival type atmosphere for the weekend with an after party the evening of the race.

Based on what I have heard about this race from last year and the Marji Gesick, also put on by the 906 Adventure Team; I am expecting this to be a really cool event.  The folks on the 906 Adventure Team seem to be a fun crew, from what I can tell.  Plus, I love the UP and will take an excuse to get up there and race.

I’ll have a weekend off of racing before the Birkie, but since the Fat Bike Birkie is the weekend before the True Grit Epic 100…  I may just be riding and not worrying about racing in the Birkie.  I expect it to be a fun atmosphere and great ride.  That being said, I will probably get caught up in it a bit and if I am feeling good, I won’t mind pushing myself a little on it.  I will learn a little more each race about how much I can push myself.  After doing the 3 other Great Lakes Fat Bike Series races on back to back weekends, I’ll probably have a good idea of where I stand with effort and recovery ability.

I had mentioned in my Solstice Chase Race Report, my frustration with my Bar Mitts, but I did fix my issue with them.  They were feeling quite constrictive with being the Small/Medium size, but I found a lot of the constructiveness was due to the loose attachment to the bar.  Instead of using the velcro straps on the end of the neoprene tab to attache to the handlebars, I ended up pulling my bar plugs and stuffing the tabs in the end of my bar end and then cramming the bar plug back in over the top.  They are mounted rock solid now and feel less constrictive after being held in place.  Plus, the attachment tab and velcro straps don’t interfere with my hand grip anymore either.  They will definitely get tested over the next few weeks and another expense for new pogies has been avoided.

Outside of the Bar Mitts, I haven’t changed much other than deciding that I would stick with a hydration pack.  I did get the 70 oz Ogio Erzberg Hydration Pack to replace my 100 oz Camelbak Lobo Hydration Pack.  The Camelbak is nice, but I was looking for something with less volume and slimmer.  The Ogio has very little room for gear, but has a pocket on the front side of each shoulder strap that is real handy and I do like the shoulder straps better.  I did get the insulated tube for it as well to help fight the freezing issues.

I did flip my stem back over to raise my bars back up a little.  They are still lower than original as I kept the flat bar on.  I was having some lower back problems and have been playing around with the bike fit.  I’ve pushed the seat forward quite a bit as well.  I also found that my seat position was about an inch further rearward of the crank than it is on my 29er.  I haven’t had back problems on the 29er, so have been trying to match the geometry.  It is a little tough, since my Fat Bike is a Medium frame and my 29er is a Large frame.   Some of the issue could also be not being used to the rigid bike as well.  I usually ride full suspension, so maybe the rigid frame is beating up my back a little more than my back is used to.  We’ll find out if the latest adjustments help or not. 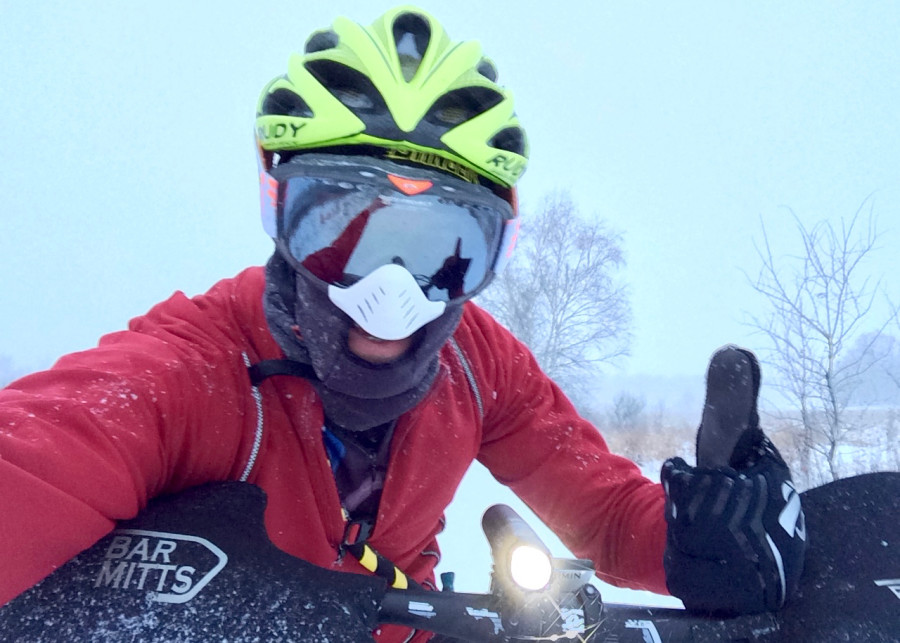 I have been using my new pair of Rudy Project Klonyx goggles and they absolutely rock.  They don’t fog up and my face has not gotten all sweaty in them.  They also have a nice nose piece that keeps the cold air off the nose.  I have not ridden an extended race pace with them yet, so maybe that could change, but I’ll most likely be using the goggles in the next few races.  I had tried a cheap pair of goggles last year and they were terrible with fogging up and my face sweating, so my new ones have been a real treat.

I’ll share some gear updates in my race reports.  I will try to get the race reports out shortly after each race, so I don’t get backed up on them.  Keep an eye out.