My buddy Mike dropped his bike off at my house Friday night, so I could load it up in the jeep and be already to go first thing in the morning.  We were planning to leave my house before 5:00 am to make the drive up to Cable.  It is about a 2 and half hour drive up to Cable and we arrived with plenty of time to grab our race numbers and get set up to race.  They had a really nice set up with a heated tent and were well organized for the check-in.

I was getting excited to ride, but still planning to treat it like a big group ride, since I was racing a 100 miler in Utah the following weekend.  I’m not in good enough shape yet to continue racing back to back weekends, especially with a 100 miler thrown in the mix.  That being said, it is hard to go out and ride in a race and not push yourself and race mode was starting to settle into my head as I put my number on my bike.

I ended up going for a short little spin up the road to make sure everything was good with my bike and gear.  I adjusted my tire pressure a little bit and decided I would try and get a decent spot in the starting gates.  I had a Gate 2 starting spot and was able to set my bike up about 3 or 4 rows back in Gate 2 and then headed inside the tent to stay warm until the race started. 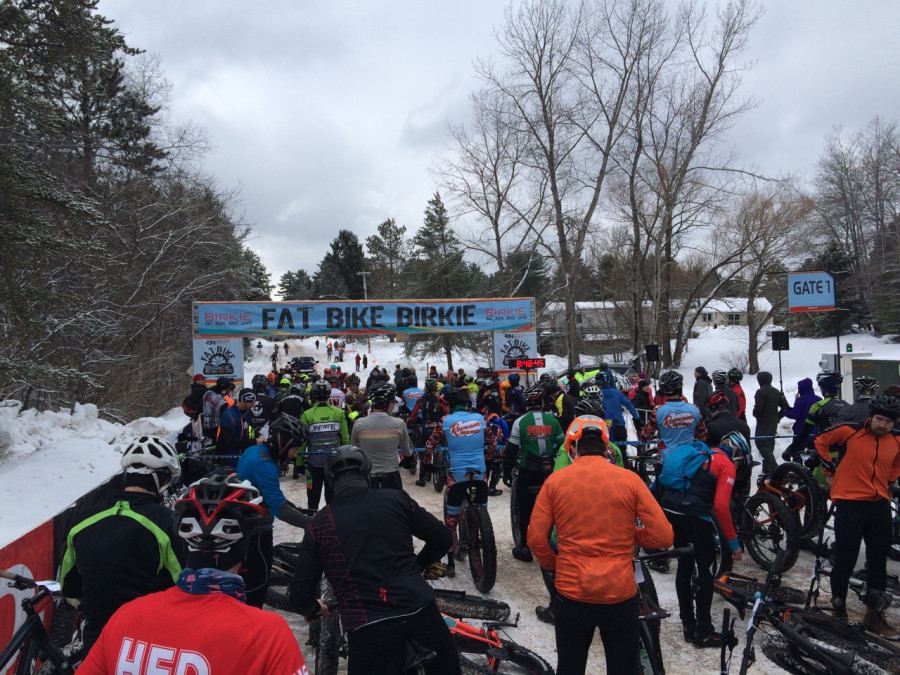 Good times were about to be had…  The National Anthem was sung, the gate tape was pulled up and we all rolled forward in preparation for the roll out.  It was a good roll out down the snow packed gravel road as people jockeyed for positions.  I think I fell back in the pack a bit on the gravel…  I get a little nervous in the big packs as everybody is squeezing into any open space in front of them.  In the grand scheme though, everybody played it fairly safe and I only saw 1 close call up in front of me.  We soon hit the groomed trails and the racing began.  The corduroy was awesome for traction, but there was still a few soft spots.

The Birkie is full of rollers and there was some good sized ones along the power lines.  I’ve made good improvements in my climbing over last season and was able to make up any lost ground during the climbs.  I don’t think my Specialized Ground Control tires roll very well, but they had great traction on the climbs.  The downhills were fast and fun, but you had to be a little careful of catching your front tire in somebody’s rut and I found the untouched corduroy to be the safest route.

We soon hit the woods and traffic started to thin out a bit.  I was having fun and starting to get wrapped into racing a little more each mile.  I found myself pushing my pace, not over pushing, but I was running around threshold for sure and feeling good.  At some point, I said the heck with it and figured I was here to race and I would worry about next weekends 100 miler… next weekend.

I usually break down my race reports by sections of the course, but quite honestly the course was more of the same throughout, except for the never ending Birkie roller climbs.  I don’t say this with any negative annotation at all, I loved riding / racing the Fat Bike Birkie course.  It was a ton of fun and my first time riding a groomed ski trail.  It was a totally different fat biking experience and I relished every moment of it.  I had a blast bombing the downhills and hanging a foot off the side as I banked around the corners at the bottom of the hills.

There was one snowmobile trail crossing halfway down one of the fast downhill sections that created a little flat section that I caught some air from…  it was a fun ride.  I did well on the climbs, but there were a few strong climbers that dropped me on a few climbs.  As we neared the finish, we were dropped back out on the power line section of the trail with some fast descents and some big climbs that I lost a few places as I was not able to hang on to the line of 3 or 4 riders I was with when we entered this section.  I hit the gravel road and pushed myself to the finish in 2 hours, 8 minutes and 57 seconds in 94th place.

I hadn’t planned on racing too hard, but I did push myself into a race pace for most of the race.  I wouldn’t call it a full 100% race pace, but I was pushing it hard for sure.  The Birkie course was fast this year for sure, compared to the previous year.  Like every race, I always want to finish better… but I was quite happy to finish in the top 100.

Fat Bike season is over now and I had some good and bad experiences.  I never quite figured out the nutrition and hydration part of it, but I haven’t really gotten that figured out either for the summer races.  I still don’t know if I am interested in doing any of the ultras.  I might keep winter racing to the shorter stuff and save the endurance stuff for the summer.  You never know with me though, so we will see what happens next winter.

I ended up racing in 5 total Great Lakes Fat Bike Series Events; Solstice Chase, Cuyuna Whiteout, Frozen Forty, 906 Polar Roll, Fat Bike Birkie and ended up finishing 21st in the series.  I am not sure I could tell you what my favorite race was, but I am leaning toward the Birkie.  If weather had been better, the 906 Polar Roll might have been it or Solstice Chase may have been the one if we had snow on the ground.  It is safe to say that I will be racing my Fat Bike again next year.  Until then, enjoy the summer race reports!