I went into the doctor today because my rib pain was severe and worse than last week, after jumping on my trainer last night… I’ll circle back to the trainer, but in short I got a new KICKR trainer. Anyways, back to the rib issue. I have also noticed that area of my rib cage sticks out further than the other, non-injured side of my rib cage. Plus, the sharp pain is in more than one spot within an area that hurts pretty bad in general.

I was concerned about tearing the muscles or something away from the bone also or the potential for a break or crack in another spot, since there were other sharp pain points. I also wanted to get the doctor’s opinion on how much I could do… As in, am I gonna hurt it more by simply getting on my trainer or am I good to go with a little spinning as long as I can deal with a little pain? I am getting way too stir crazy. I would not be bothered by sitting around being lazy 5 or 6 years ago, but sitting around now is driving me crazy!

At any rate, the good news is that the doctor told me that he and the radiologist looked at my original x-ray and the “break” identified by the urgent care doctor was a line of bone overlap and tissue connection, not an actual break. He said that I tore the tendon and muscle tissue between the rib bones, which I guess explains the pain over a larger area, the multiple spots of pain and the whole area being sightly swelled out in comparison to the other side. Regardless, he did say the tendon and muscle tissue situation isn’t really any better from a pain standpoint. However, he did give me a better outlook on recovery time. It also sounds like I can go ahead and do some easy spinning without doing more damage. I think I would have been fine on the trainer last night if I wouldn’t have started ramping up the power.

So at any rate, I am pumped, because I was gonna shy away from riding any single track for awhile as I didn’t want to crash or take any hard hits with an already broken rib. He also made it sound like I’ll be feeling quite a bit better in another week or so. If that is the case, then I might be able to get on some single track in 2 to 3 weeks and be back in the game sooner than I thought.

I had already rearranged my schedule to skip the Maah Daah Hey 100, as I wasn’t going to get barely any decent riding in before the race. I might have to take another look at my plans now. That being said, I’ve been sedentary for 2 weeks now and will probably not do anything more than some short endurance or tempo spins over the next week or 2. That brings me within a couple weeks of Maah Daah Hey. It is doable, but I’ll be quite a bit out of shape and don’t really want to wreck myself for the rest of the summer and the Maah Daah Hey is sure to wreck me if I am not prepared.

More to come on that I guess… I’ll keep you posted. I will tell you that the pain right now is pretty severe and a sneeze or cough will bring me to my knees. It was starting to feel noticeably better at the end of last week and then I started moving around a little more over the weekend and even got on my trainer last night. 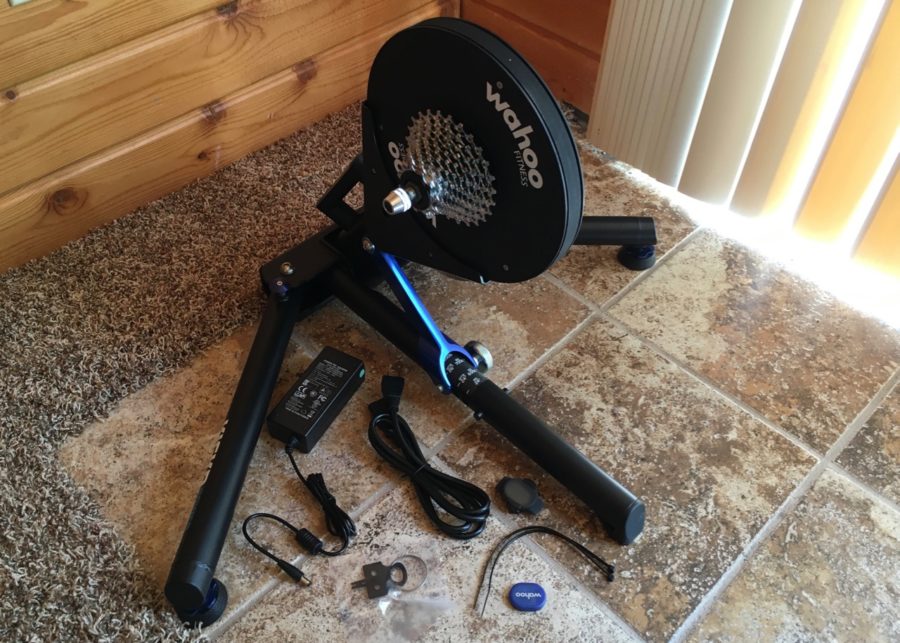 This is a whole different topic, but I did get a new KICKR over the weekend and I couldn’t help but give it a spin. Needless to say, I pulled the plug early on my spin. I did a warm up, then a little recovery and then was going to give an attempt at a threshold run… Probably not the smartest thing to do, but I have never had power and badly wanted to do a threshold test with a power meter. As I said earlier, I was also feeling noticeably better toward the end of last week. At any rate, I pulled back 3 to 4 minutes into the threshold portion as the pain was pretty severe with the deeper breaths. I had more pain this morning than I’ve had in at least a week and decided I needed to go see the doctor for a follow up.

Threshold Testing My Wife On The New KICKR

Kudos to my wife, who doesn’t really ride outside of our family rides. But in my excitement of the new KICKR and me not being 100%… She willingly jumped on the KICKR and let me put her through a threshold test, so I could have some data to nerd out with. I don’t think she realized what she was getting into. She did great, but did threaten to give me a cheap shot to the rib about 10 minutes into the threshold test when I told her she needed to step it up a notch. I will be posting more about my experience with the KICKR in the future, so stay tuned on that one.

So in summary… Not really sure if I’d rather have a broken rib or the torn tendon and muscle tissue. The doctor sounded like it wasn’t really any better of a situation from the pain standpoint, but he was optimistic about healing up a little quicker, than I originally thought when I left urgent care a couple weeks ago. I will probably get a few light spins in throughout this week and ramp up as things feel better. I will keep you posted on my training ramp up, the KICKR and my racing plans.

I will also go back and update my race report somehow with a correction, regarding the broken rib. As always, thanks for reading and following along. I’ll keep you posted…