Well… I decided I would like to try road racing again. Not that I was ever into road racing seriously in the past, but I did try a few road races 2 years ago, along with a few crits and time trials. The THK road race in Avon, MN was the first road race I did 2 years ago after a couple of crits. I thought it was a good event and decided to give it another shot. I’m in the Cat 5 group and even though I road ride often, I have a lot to learn about the game of road racing. 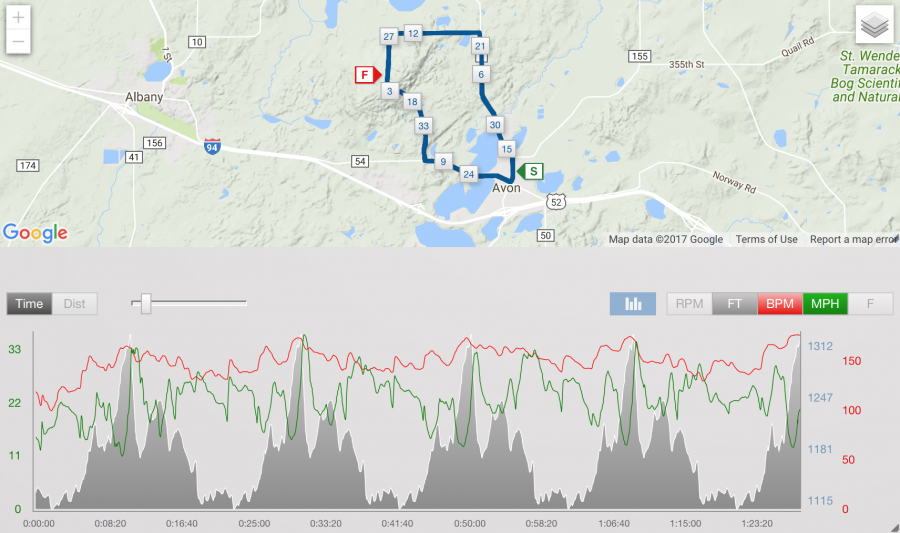 The rollout started a few miles before the start/finish line, so we did close to 4 and a half laps. The start finish/line was at the top of a hill where the “F” is at in the map above.

I just sat in the pack and got used to riding wheel to wheel again. I noticed about halfway around the first lap that my water bottle cage was rattling back and forth to the point that I was afraid it was going to come loose. I think it was toward the end of the first lap that I ended up stuffing the water bottle into my back jersey pocket in an effort to avoid loosing it and my cage.

I sat in the pack for most of the lap, but did move toward the front as we approached the lap/finish line climb. I wanted to test myself or get an idea of where I stood with the other guys in preperation for the climb on the finish lap. I started about mid pack and then pulled myself up toward the front few guys and crested the climb with the leaders. I felt ok going up, but had this feeling that the other few guys up front had a bit more left in the legs going up than what I did. I let that get to me a little bit and my confidence dropped as I was thinking about how I would approach it on the finish line.

My legs felt a little heavy and I think it had to do with the fact that I never did any warm up, other than about a quarter mile of easy spinning before the race start. Other than the hill climb, I really hadn’t gotten the blood flowing well for a long enough period yet. I find that a good short, but steady threshold effort of a couple minutes really primes my system and I never got there.

The first guy that made it over the crest of the hill took off in a break. 2 or 3 of us chased him down fairly quick and were followed by the rest of the pack. My legs were still feeling heavy after that and I settled back into the pack. The rest of the lap was not that eventful, but the pace did pick up a little bit. When I looked back at the data file after the race, I see that lap 3 was actually the fastest lap with an average speed of 24.7 mph. The previous laps were closer to 23 mph.

You could tell as we started lap 4 that folks were a little more on their toes. Racers were a little more aggressive about jockeying for a good spot in the pack and not getting sucked toward the back. Based on the speeds that we were doing in a pack, I felt it was fairly unlikely at this point that somebody would be able to make a successful break for it without getting chased down. I sat in for most of the lap and tried not to get sucked backwards too much as folks were pushing toward the front.

When we made the final turn to start up the hills to the finish, I found myself about mid pack I think, with not really a lot of room to work forward. I certainly could have set myself up better coming into this final turn. We crested the first part of the hill, which is pretty mild, at a fast pace. This made it a little tougher to push forward. When we hit the bottom of the bigger climb, I found a hole to make a break toward the front, but at this point the lead folks were starting to stretch out a bit and there was definitely too much ground for me to make up.

I did get by quite a few folks, but then couldn’t maintain that effort and ended up getting passed back up by half of them that I had worked by. I remember 1 guy pulling along side that was gaining some advantage with each pedal stroke. I thought I was going to lose him, but I found a little bit left in the tank to inch back by him at the finish line.

I ended up finishing 19th overall out of 55.

I wasn’t real happy with my 19th place finish, but I was definitely sitting way better off than I was 2 years ago in my first THK road race. 2 years ago when I did this race, I actually got dropped and spit out the back of the pack on the lap 2 climb and never caught back on. I definitely climbed stronger this time, but I still have some work to do.

I failed to put myself in a good position coming into the last stretch to the finish, but I doubt I had the legs to hang with the podium guys. I left myself in a situtuation having to scramble and put in a hard effort at the last minute, that I couldn’t maintain all the way up the climb. I should have been more aggressive a couple miles back to put myself in a better position and I think I would of had some better results.

I wasn’t sure if I was going to like trying out the road racing again, but I actually really enjoyed it this time around. I approached it more as a learning experience and group ride than anything else and tried not to take it too serious. There really is a lot to learn with it and I’m looking forward to doing some more road races.