I knew the weather forcast was looking rough for the Detroit Mountain Shakedown race, but I still failed to plan accordingly for the cold temps and rain. I don’t really have the proper cold rain gear set up to begin with, but it has now moved up my priority list. Regardless, I hadn’t packed anything more than just my summer race gear and a base layer that was packed in our camper for the weekend.

This would be race #2 of the 2017 Minnesota Mountain Bike Series and my first time riding the trails at Detroit Mountain Rec Area. Actually, this was my first time to the Detroit Lakes area all together. Enjoy the report…

Video, Strava file, link to results & any other reference links at bottom of report.

I enjoyed the course layout. There was of course the climb up the ski hill, which really wasn’t a bad climb other than a steep switchback or 2, soft ground near the top and a last steep section to get you over the top. The rest of the course was very smooth and flowy, with only 1 very short and minor rock garden area. It wasn’t even really a rock garden, but more some larger scattered rocks on a very short little up hill. It really was a course that would be great for a fully rigid bike. The first lap was a half lap and you can see where we headed to the right from the start line vs the rest of the laps where we took a u-turn to the left after crossing the start/finish line.

This is the elevation profile for 1 one full lap. Outside of the ski hill climb, the overall elevation was pretty mild. After doing the elevation correction, Training Peaks is showing me 1858 feet of elevation gain over the 41 miles that I rode. Keep in mind that I climbed the ski hill 5 times and not 6, since we skipped it on the first lap.

The start was fairly mild and our first section of trail was pretty messy. I was caught behind somebody getting pretty cautious about the slippery trail as a gap quickly started forming with a few guys off the front. I was able to pass and then started bridging the gap. This was the section of trail that was extremely slippery and I’m suprised that none of us went down, or nobody that I knew of anyways.

We eventually hit some trail that didn’t look like it had been ridden yet and was in amazingly good shape for the weather. I had caught up and passed 1 other rider to come through the first lap sitting in 3rd spot and about 20s back from the leader. I felt like my hands were starting to warm up a bit and legs were feeling ok. My heart rate monitor wasn’t working for most of the first lap, but the pace was pretty controlable and not out of hand. 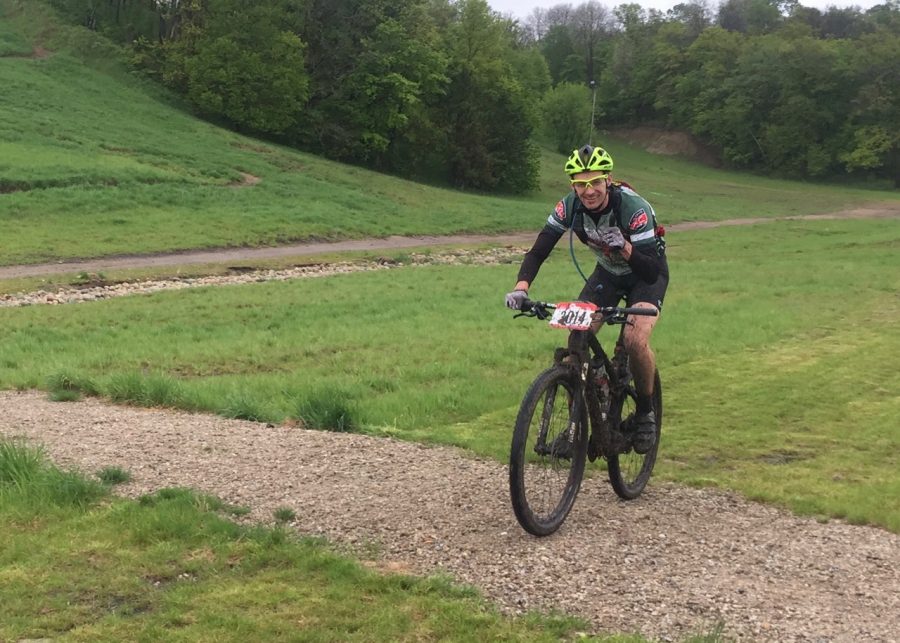 The first half of this lap would be new trail as our first lap started with the second half of what would be a full lap. Down the back side of the ski hill was some nice flowy stuff with a few berms where I was a little cautious about hitting slippery spots, even though the trail was actually pretty dry. I dumped into the really slippery section of trail and then back out on some new stuff again.

Somewhere in here, I could sense another riding chomping at my heels. We rolled together for a little bit and then I slipped up on a really muddy short uphill where he was able to dig in and get by. He was on a mission after that and disappeared out in front of me and I ended up coming through the start/finish lap sitting in 4th position. 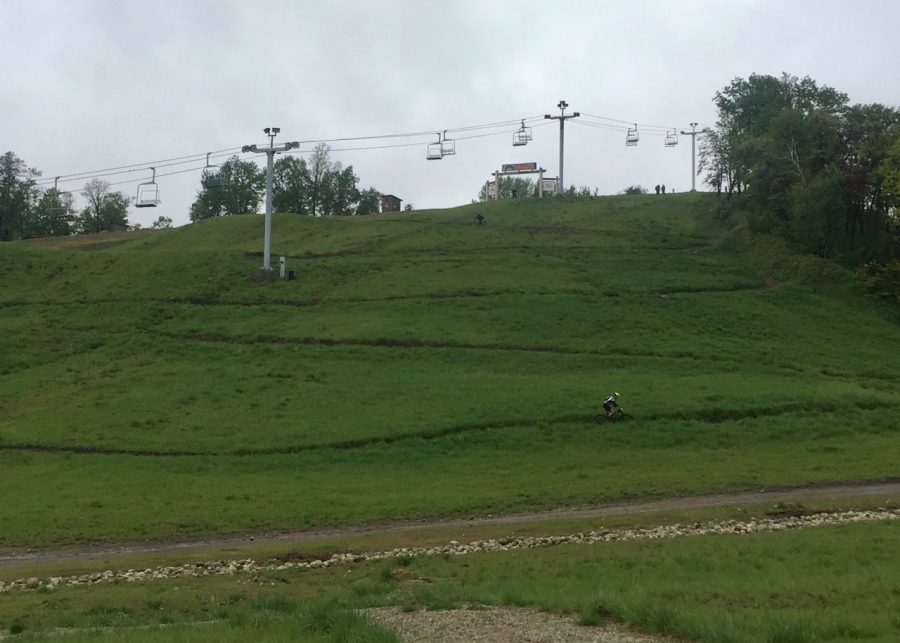 As I was headed up the ski hill, I could see a couple more guys a switchback or 2 down from me. I maintained pretty much the exact same pace on lap 3 as I did the previous laps. My hands were starting to get cold again and the cold dampness was now starting to settle into my feet. It wasn’t quite effecting me yet, but it was getting in my head a bit. I think it was somewhere mid lap that a couple guys caught and passed me. They were riding a strong pace and I let them go and stuck to the pace that I was on.

In hindsight, I probably should have picked up the pace and stayed on their wheel. My effort was not nearly what it was at the Woolly race 2 weeks prior and picking up the pace probably would have helped fight off the cold that was setting in.

I believe I got passed by a rider at the start of this lap with another rider nipping at my heels, who ended up passing me later in the lap. I was starting to feel the cold more on this lap also and my attitude started going to crap. My pace started to drop by the end of this lap, which ended up being about a minute off from the previous 2 laps.

I grabbed a Red Bull before heading up the ski hill switchbacks. I knew at this point that I was only going to get 6 laps in and quite honestly, I just wanted it to be over. My hands and toes were feeling pretty numb at this point and it crossed my mind that I might be tossing in the towel after lap 5. My pace dropped dramatically on this lap.

During the easier sections of trail, I was sticking my hand in my jersey and under my armpit to try and warm them up. I kept wiggling my toes to try and get some blood flowing as well. They were freezing, but I didn’t think enough to cause any damage and decided I would knock out another lap. My pace had dropped by 5 minutes on this lap. 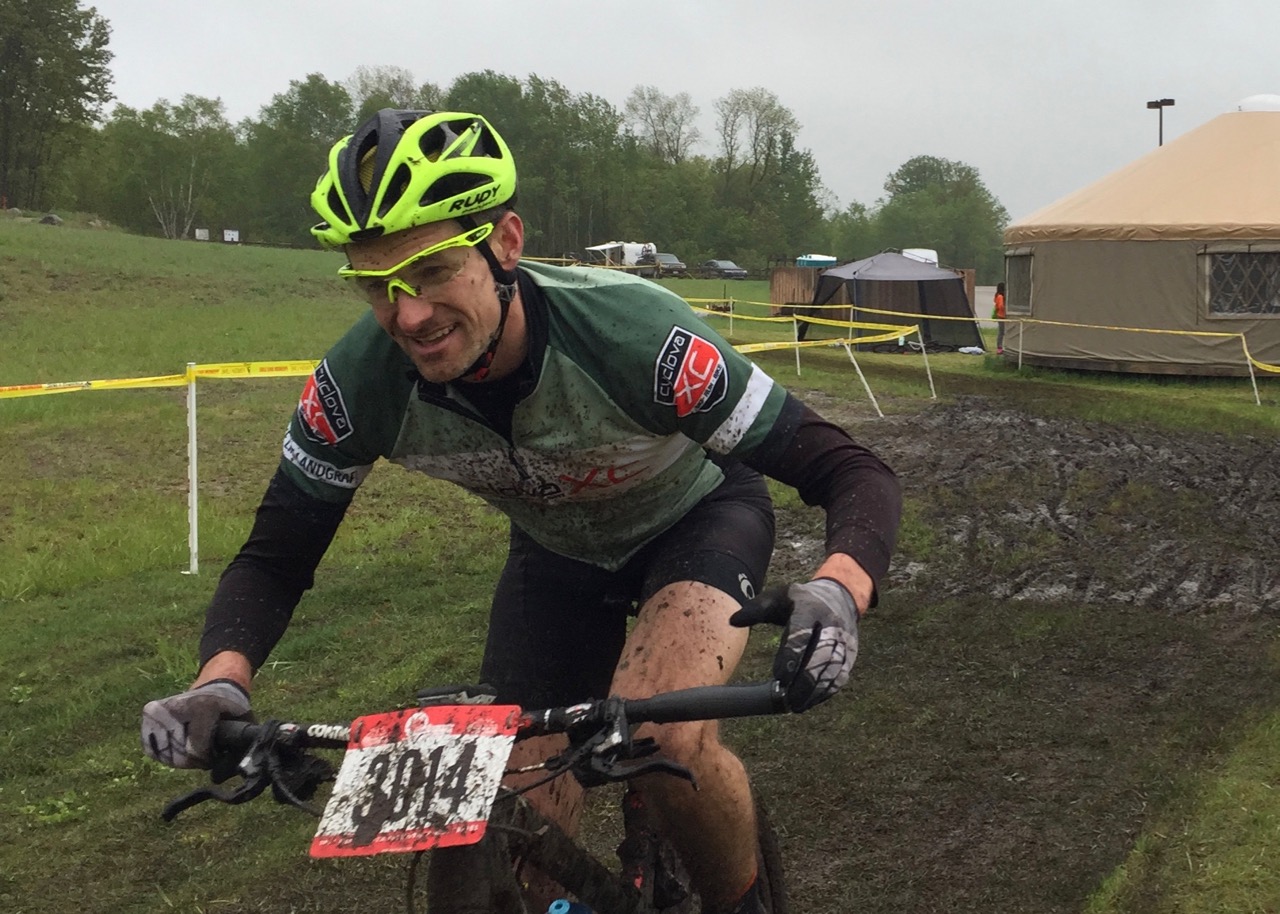 As I passed by the ski challet, I saw a couple riders who passed me earlier that had decided to pull off and were at the bike wash. They gave me a shout out of encouragement for heading out on another lap as I went by, which I needed! I knew this was my last lap and picked up my pace. I just wanted to get it done. I still got caught and passed about a mile or 2 from the finish line by another rider even though I had picked my pace back up. The last lap was about 3 minutes faster than the previous, but still a couple minutes off of my first few laps. Regardless, I was happy to be finished and happy to see my wife and kids cheering me across the finish line.

I ended up finishing in 7th in a field of 17, about 20 minutes back from the winner with a total race time of 4 hrs and 24 minutes.

In general, this was a pretty miserable day of racing. My average heart rate was down and I didn’t feel like I was putting in the same effort that I did at the Woolly race 2 weeks ago as my  head just wasn’t in it with the cold and rain. I assume this was likely the case for some of the other racers as well. I think in normal circumstances, this would have been a 7 lap race vs the 6 laps.

As a side note, the average speed on the first lap in he chart above is high, because we skipped the climb up the ski hill. It really wasn’t a faster pace.

As far as the trails go… I was quite amazed at how well the trails held up. There was some trail, that had barely looked like it rained and then much of it was in about the condition that you might say to give it a few hours to dry out before riding. However, there was a section that we shouldn’t have been riding at all, that was extremely slick and sloppy that I made mention of in the lap 1 section.

I think at the end of the day the sloppy singletrack section probably held up fairly well as we pulled off the top layer and by the end of the race it was down to the solid drier ground. I don’t know enough about trails to know if that fairs well for the trail in the long term or not though. There was of course the random spots that held water, where ruts started to form as well. Without a doubt it will require some clean up, but probably not nearly as much as you might think, given the conditions and what our bikes looked like when we came in.

Thanks to my wife as well for running out to the trail each lap to see if I needed anything. We had a cooler sitting out there with some extra water bottles and a Red Bull so that I could help myself, but she still ran out each lap to check on me. My kids stayed warm inside the challet, but came out at the end to cheer me across the finish line.

I’ve got some other non-series races planned in the coming month, so this will be the last of the 4hr Marathon reports until the July/August time frame. Next up is the Borah Epic in Cable/Hayward, Wisconsin…