I have been wanting to mix things up from just mountain biking and had the opportunity this past weekend to do so with a bike, paddle, run at the Grantsburg Adventure Triathlon in Grantsburg, Wisconsin. I had a strong bike ride and then dropped some time in the kayak and more in the run to end up in 4th place on the day. Enjoy the details…

The bike course was fairly mild and right about 19 miles. There were a few miles of pavement and a little over a mile of 2 track with some washouts and the rest of the ride was gravel. There was very minimal elevation with a slight hill at the start and a few ups and downs in the 2 track section. The bike started near the finish line in Memory Lake Park and ended in Crex Meadows at the kayak transition.

The kayak was labeled as 2 miles, but it wasn’t quite 1 and half miles. It was a full loop and was marked really well. Volunteers had your kayak ready for you in the water at the transition and took care of it for you coming out of the water as well.

The run was just over 8 miles with about 2 miles of pavement, half mile of gravel, 1.5 miles of 2 track with some sand and 4 miles of cross country trails with a few hills. The run started in Crex Meadows at the kayak transition and finished in Memory Lake Park. 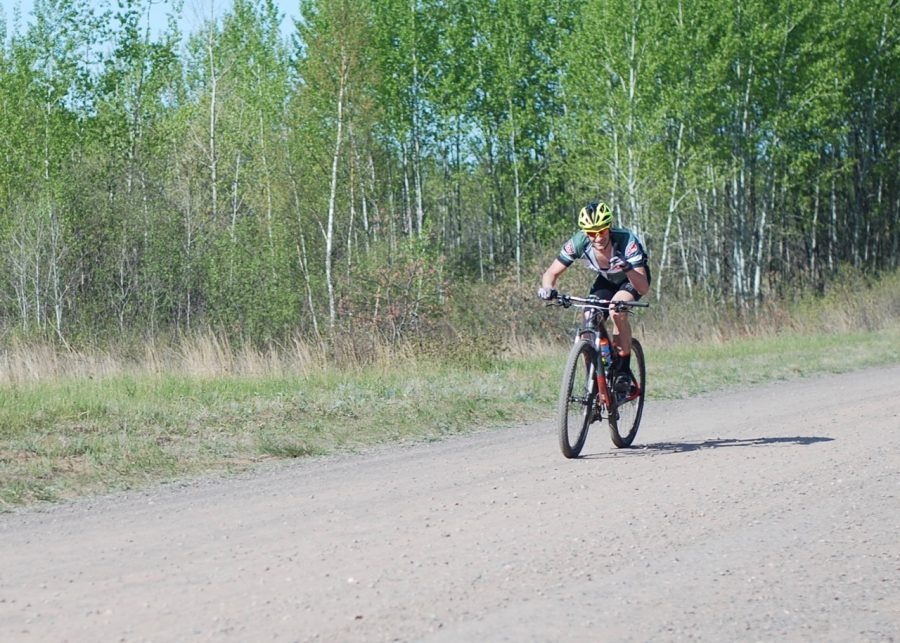 We were lined up across the 2 lane road and rolled into a fairly hard start. I noticed one guy off to the right on a gravel bike that started to lead out with a harder effort as we started up the very slight hill. I knew we had a sandy corner up ahead and decided to step on it and went out hard to get a lead. It wasn’t a hard sprint, but I put a hard enough effort in to break out front and start pulling away. I figured if I could lead out now, that I could probably get a little more seperation in the sand and make them chase me down. If I couldn’t handle the effort, then I could dial back and adjust as needed. I was going to drop some time in the run and the bike was my chance to put some time on the field if I could.

I made the turn around the sandy corner and had a lead as we approached what was probably the only real intersection on the course. I backed off slightly as I approached the intersection as I wasn’t 100% sure that the officer had the traffic stopped and looked back and forth a few times. I could see it was clear to go and he was going to hold traffic, so I got back on the hammer down one of the few sections of pavement on the course. I figured if I could hold off the chase on this section, that I was going to be good to go. I was riding my full suspension 29er with a 2.4″ tire on the front and 2.2″ tire on the rear as opposed to the gravel bikes that many of the folks I was worried about were riding.

I was able to pull off a little more gap on the pavement and then maintain it. We hit the gravel in Crex Meadows for a very short period before hitting some 2 track with a bit of sand and wash out in it where I assume I had a little advantage with my larger tires. I lost sight of anybody chasing through this section and was now passing traffic from the wave of relay team racers that started 5 minutes in front of us. When I exited the 2 track, I was past most of the relay folks.

I believe we dumped out on a short section of pavement again before hitting some more gravel. I could see somebody chasing behind me. I was still feeling comfortable with my heart rate sitting around 162/163 bpm and knew that I could ride a couple hours at this effort. We hit a section of head wind, where my paced dropped off a little. I think I lost a little bit of the gap I had to my chaser, but I knew we had a large gap on the rest of the field as I could only see the one chaser a couple hundred yards back.

We were now rounding our way back around the wetlands/ponds of Crex Meadows. I knew I would get a short rest for my legs during the kayak, so I kept the pressure on and increased my gap a bit more in the final couple miles of the bike.

I ended hitting the bike to kayak transition with a 23 second lead. 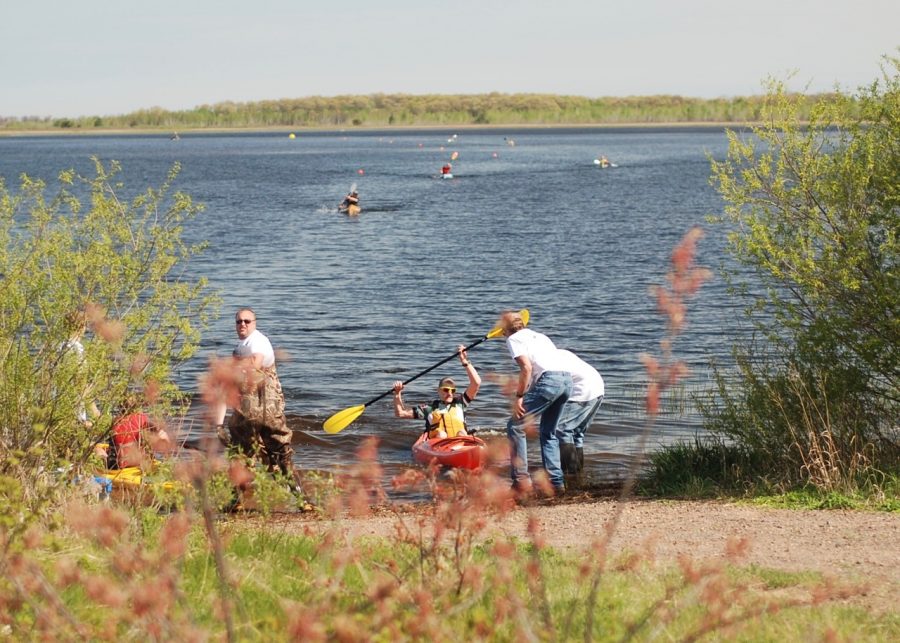 Once I got going on the water and looked back, I could see that my chaser had a long sea kayak and was gaining on me fairly quick. It seems like my kayak wants to top out at around 5 mph and then takes exponential amount more effort to get any more speed out of it, so I settled in and didn’t over push it. I ended up getting chased down and passed about half way around the kayak course. I could also see some of the folks that had come in on the bike 2 to 3 minutes back, gaining some ground on me.

I ended up losing anywhere from 1.5 to 3 minutes of time on the kayak to all but one of the folks that finished in the top 10. I was now sitting in second, a couple minutes back from the leader with a diminishing gap to the next few chasers. 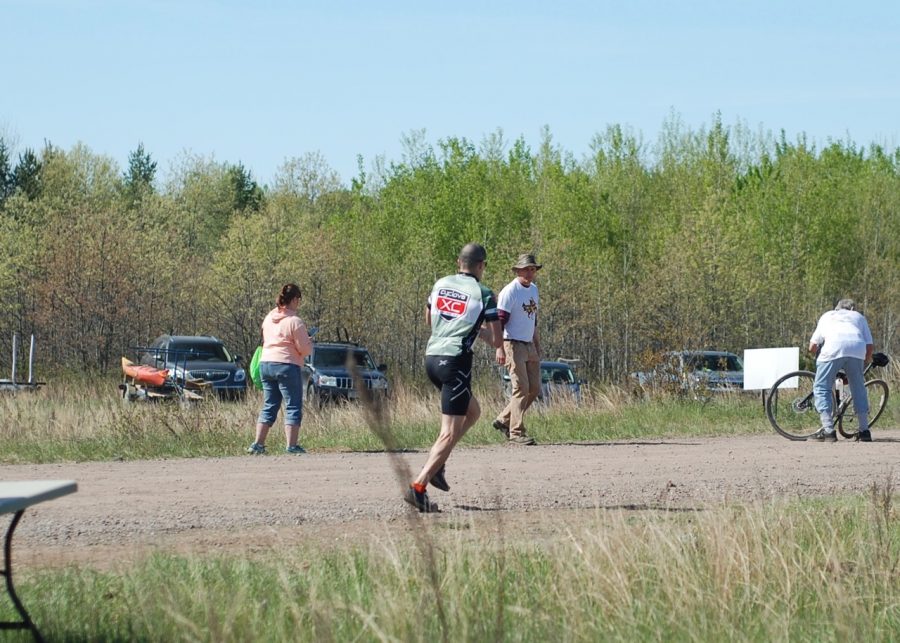 I took off on the run, feeling good. I grabbed some water from the aid station, just outside of the transition and eased into my run up the gravel road. About halfway up the gravel along the lake, I found a comfortable pace. I hadn’t run 8 miles in quite awhile. In fact, I think it has been 2 years. I believe I topped out at 6 last year and around 5.5 this year for continuous steady runs. I did have a 6.5 mile run this year, but that was with some longer intervals and walking between intervals.

Anyways, I looked down a few times at my watch throughout the first couple miles of the run and could see that I was averaging about a 7:20 pace. I was real happy with that at this point. My heart rate was also hanging in the 150s and I figured this was probably the pace to hang at. I was confident with how things would go the first 3 to 4 miles and figured mile 4 through 6 would feel a little tougher and that the last couple might hurt.

As I made my way around the 2 track section and through the sand pit area, I could see a couple folks a few few hundred yards back. About 3.5 miles in I got passed by the 2nd and 3rd place finishers as we were headed down the pavement road back to the park. I stopped and grabbed some water at the aid station in the park before hitting the trails and was averaging a 7:28 pace up to this point, 4 miles in.

About a half mile into the trails, I could feel my legs starting to get heavier. My pace was dropping a little, but more due to terrain vs fatigue. My pace on mile 6 and 7 dropped to about an 8:15 pace. My legs weren’t hurting, but I was starting to have more trouble turning them over and my form was coming apart a little bit. The terrain during these miles was probably a little hillier as well, which also impacted the legs and the pace.

After the 7 mile mark, I slowly started picking things back up and was in the home stretch. I managed to bring my pace back below 8:00 min/mile for the last mile. I came out of the woods and could see the finish line area and cruised in. I ended up averaging a pace of 7:44 min/mile for the entire run. I lost some massive time to the 2nd place finisher Greg, who put 7:00 min on me during the run. I ended up 4th overall and a little less than 5 minutes back from the winner and just under 4 minutes back from 3rd place.

Summary of The Grantsburg Adventure Triathlon

Going into the race, I knew I was going to lose some time in the kayak to folks with sea kayaks and then also drop some time in the run to the serious runners. I figured the run was going to hurt more than it did, regardless of what I did on the bike, so my strategy was to get as much jump on the bike as I could. I just didn’t think I would actually finish the bike in the lead.

It was definitely a gravel bike advantage course overall. That being said, I had pumped my tires up with extra air and overfilled my rear shock and cranked the rebound damping dial over as far as it would go. Other than the little extra weight of the bike, I don’t think it was that big of a deal. I did have a little advantage popping around that sandy corner at the start and the 2 track about 4 miles in, but everything else was gravel and even a few miles of pavement. To do it over again, I think I might have actually pushed things a tad harder on the bike still.

I probably should have pushed things a little harder in the kayak as well. My heart rate only averaged 133 bpm in the kayak and I lost a lot of time. I might have been able to squeeze out a little more speed. I also probably should have skipped changing my socks after the kayak. My feet never got wet, but they were a little sweaty from the bike and I thought it was best to start with dry socks. I was also expecting the run to hurt a lot more than it did, which is why I wanted to start with fresh/dry socks.

As far as the run goes. I was happy with my overall pace, but have a lot of work to get to where I want to be with the running. That being said, my running has made a lot of progress and the structured interval run workouts I have been doing are paying off. A big win for me on the run was getting through the 8 miles without my pace dropping dramatically. It did drop in the last 4 miles, but I would say that my pace drop was pretty commencerate with the more difficult terrain on the cross country trails.

At the end of the day, I really enjoyed this type of racing. I was looking at some other events like this in the area, but this ones seems hard to beat from a course layout point of view. Some of the others are much more focused on the paddle. The Grantsburg Adventure Triathlon seems to be really well balanced, although I’d recommend the kayak portion stretching out to a full 2 miles if they can make it happen. Overall, it’s a great set-up and nice course.

I’ve learned to wait till the end of the season before commiting to next season’s races, but this one will go at the top of my list for spring events next year. It was really well run, well organized and I can definitely recommend it as an event to check out if you are interested in some multi-discipline events.