The City of Trails 10k Trail Run in St. Croix Falls, Wisconsin was my first true trail running event. I ran a little cross country in High School in the 1990s and have done a few other offroad events, but none of them consisted of true singletrack hiking trail like The City of Trails 10k course. I enjoyed the event and running on technical singletrack made me want to do more true trail running events. There was also a 1k trail event for the kids, a 5k run that was all pavement and then a tough half marathon trail run that will be high up on my potential event list for next spring/summer.

Strava file, extra photos and reference links at the bottom of the report 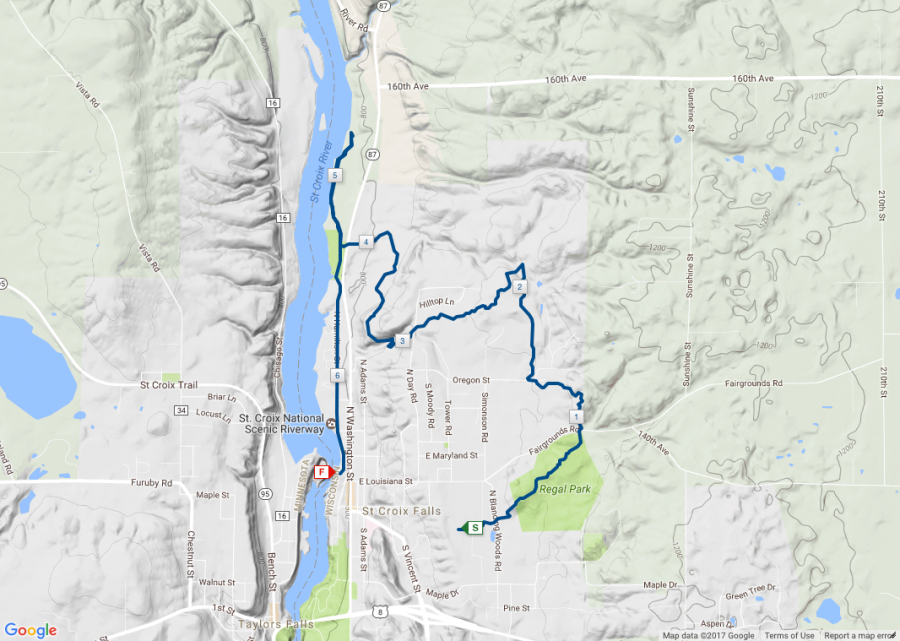 The race started next to the St. Croix Falls Middle School with a very short road section to another short section of paved trail, before hitting the Ice Age Hiking Trail. The first 4 miles was true hiking trail, followed by a little over a mile of gravel path and another mile of pavement. My gps file shows the actual race distance at 6.5 miles vs 6.2 miles. Another racer had confirmed the same 6.5 mile distance as well on a different gps device.

For those interested… The half marathon course started from the same location, but headed over to Interstate Park for some challenging singletrack and elevation changes before hitting the full 10k course to finish off the half marathon mileage. From my understanding, the first half of the marathon course was more challenging than the second half. The second half being the 10k course.

Regal Park Trail Description – This section of trail was a lot of fun and very technical when it came to foot landing over some of the rocky sections. It was pretty much all uphill with a few short rocky drops.

We split off from the 5k folks after a short distance on the paved bike path and I hit the Ice Age Trail in 4th position. We were fairly tight and I had another runner right on my tail. As we headed up through some of the rock gardens, I could see the 1st place runner was strong and slowly creating a gap to the 2nd and 3rd place runners ahead of me. I badly wanted to make a pass and see if I could hang, but 2nd and 3rd were on a great pace and I didn’t think I had the legs to get around them at the moment, so I sat in and paced off the back of 2nd and 3rd.

Fairground Trail Description – This was the smoothest and cleanest singletrack in the entire race (outside of the gravel path and road in the last couple miles). It was switchbacks uphill and then a longer downhill on really nice singletrack through the woods.

I knew I had went out hard and was starting to feel it, only a mile into the race. However, I also knew that the race was going to be less than an hour and I could go really hard for an hour, treating this race like a full blown threshold test. I was confident my lungs could handle it, but my running legs were the question.

I continued to sit in 4th position as I watched the lead runner pulling away from us, but we had dropped the 5th place runner off my heels at this point. About halfway through the fairground trail, I felt like I was getting ready to make a pass, but continued to sit in and relaxed on the downhill. I knew we would be coming to the Oregon St. crossing and hitting a wide path where I could more easily make my pass with less effort. We dumped out at the road crossing and I saw my wife and kids there cheering me on!

Zillmar Park Trail Description – The Zillmar Park trail section had a mix of everything from across the course. It started with a climb up through a field on a wide path before hitting the woods. Once in the woods, we encountered some rocks, singletrack, tree roots, etc… with a couple of tight turns and short uphills. It finished off with some more exposed rock similiar to that of Regal Park and then some wide path out to the road crossing.

We hit the wide path heading up the field where I made my pass and put in a hard effort on the climb up through the field to the woods. I approached the hill, much like I would approach a hill on the bike — Get after it and get it over with.

I hate slogging up hill climbs as they mentally beat you up and I learned to attack hills and crest the top with physical and mental momentum. Momentum plays much less of a roll while on foot versus the bike, but I think there is a bit of mental momentum that is largely in play while on foot if you put the hammer down and get up the hill. You beat the hill instead of the hill beating you.

Once in the woods I came up on a few of the marathon runners who had started earlier in the morning. I also felt like my shoes were loosening up a little. I made quick work of the technical stuff, up a couple of the short hills and was out on the wider path with exposed rock when I realized my left shoe was actually untied.

I had no choice, but to stop and retie it. My right shoe felt looser, but it was still tied up with a tight knot so I chose not to mess with it. Just as I was finishing up… 2 of the 10k runners, that I had passed at the start of this section, came running by and I was now back in 4th position again.

I got back on the trail and worked my way down the wider path with some exposed rock that eventually turned into mowed grass before popping out at the trailhead and another road crossing. There was an aid station set up and my wife was also there with a water bottle and cheering me on. I stopped quickly to grab a shot of water and then got back at it.

Mindy Creek Trail Description – Mindy Creek was not as technical as all the exposed rock like in the Regal Park trail section, but it was composed of the steepest sections of trail on the entire course and it made you work. You really had to be careful to not let your feet get away from you in the downhills and the 3 uphill sections were steep. Although not as rocky as some of the other sections of trail that I can remember, it still had plenty of rocks and roots to keep you focused on your footing. It was probably my favorite or more fun section of trail on the course.

I went into Mindy Creek really fast and wanted to make up the time from having to stop and tie my shoes. I came up on the now 2nd and 3rd place runners as we came down the first section and they let me by quickly. The terrain here was very steep downhill, with a tight switch back and then a little dry creek crossing over some rocks with a steep uphill on the other side.

I attacked the uphill, much like I would on the mountain bike again and hammered up it quickly before loosing momentum or giving my mind enough time to realize I was going uphill. Mindy Creek was mostly downhill though and I was carrying good speed. The 3 punchy uphills definitey caught up to me by the time I dropped out at the road crossing and I was ready for some flat running.

Lions Park to the Finish Line

Lions Park to Finish Trail Description – It started with an out and back gravel pathway that was about a mile and a quarter in total and finished with a tad over a mile of asphalt road. The road dumped onto a very short section of asphalt path up to the finish line.

I hit the out and back section and was catching quite a few of the marathon runners now who had started earlier in the morning. The trail was a wider gravel path with a couple light rises and falls in it, but feeling mostly flat. I saw the 10k leader coming back and knew I had to be getting close to the turn around point, but he had a little more time on me than I thought. I finally hit the turn around point and felt like I was in the home stretch and started picking up my pace.

I quickly ran into the 3rd and 4th place runners not far after making the turn and then continued seeing more 10k runners on my way back from the turn around point. I maintained a good pace as I had the feeling that the finish was closer than it really was and probably picked up my finish line effort a little too soon. I popped out of the woods and hit the pavement section that would lead me into town and across the finish line.

The pavement section felt like it went on forever after running all that great trail. It was a flat and straight section of road that you could see forever on and made you feel like you were standing still and not making any progress. I made a short moving stop for some water at the aid station being run by Snap Fitness of St. Croix Falls and kept moving. I had to be close to the finish, but my throat was dry and needed a little water.

A little further up the road, I came by a little girl with a make shift aid station at the end of her driveway who handed me an ice pop as I ran by. This wasn’t far from the finish, but I think it made her day handing them out. I took the popcicle and thanked her as I ran by. In hindsight, I think ice pops are the way to go for hot weather running. That thing lasted me nearly to the finish line and was way easier to deal with than water cups from the aid stations.

I finally finished the road section and hit a paved path where I could hear the finish line cheers. I put in my last hard effort up the slightly rising paved trail to cross the finish line.

I really enjoyed running the technical singletrack. What I like about the trail running is the constant change of pace, watching your footing, attacking on the climbs, etc… It was an entertaining race and more strategy was involved vs running a flat paved course. I will probably do some more trail running and likely put the City of Trails Half Marathon Trail Run as a high potential event for next year.

My kids also did the 1k event, finishing 5th and 6th. They did the event last year as well and were looking forward to it. They definitely have some competitiveness between the 2 of them and it is fun to watch them push each other. My 7 year old gave my 9 year old a run for his money. I think the best part of my day was seeing them sitting on the sidewalk at the end of their race with beat red faces, looking completely spent like they gave it their all!