This one is short, but I like documenting all these events… I wasn’t sure what the Fatbike Enduro Runs were going to entail, but I had the opportunity to stay in Marquette for another day and figured why not… I’m glad I did, because it was a ton of fun and the 3rd run pushed my riding limits or at least got me to loosen up a bit.

The Fatbike Enduro consisted of 3 downhill runs that you had to ride, or push your bike up to the start and then you were timed going down. We had a few hours to get it all done and the winner was the person with the fastest combined time for all 3 runs.

These all took place on the Marquette South Trails.

This run is actually in the Marji Gesick 100 race and is not a technical downhill, but a smooth and bermed jumped line instead. It felt like the top was a little slick, so I went into it a little conservative as I figured sliding out would completely ruin my time. I could have definitely went faster and eventually realized that traction was really good. It was too late though and I think I had about a middle of the pack time down Eh Line.

I don’t believe I’ve ever ridden down this trail in the summer. It’s called Flow Trail, but I don’t know that I really had too great of a flow down it. It was really narrow and I think snowshoed in the night before. I again went into it a little slow as I feel skittish in really narrow trail, but picked up speed toward the bottom. There are some narrow bridges to hit and then another bridge near the end that you will catch air off the other side if you come into it with any speed. Again, I think I had about a middle of the pack time on this run.

Chunder Muffin was awesome. It actually had some rocky drops in it. You roll down some of them or just send it and I don’t know what got into me, but I sent it…! It was a really narrow trail with some really tight turns and multiple drops. I found myself coming over a drop, picking up a little confidence… Letting it fly a little more over the next and then just letting it go after that. I did slide out once into a small pine tree, but quickly got rolling again. Then again at the bottom, I slid out on the last turn right before the finish line. Some of the folks that were not riding had all hiked up and were cheering the riders on. It was scary and fun all at the same time. I actually had the 2nd fastest time down this one.

I was all smiles at the bottom and decided I “need” to do more of this. I spent the rest of the day dreaming of long travel bikes… 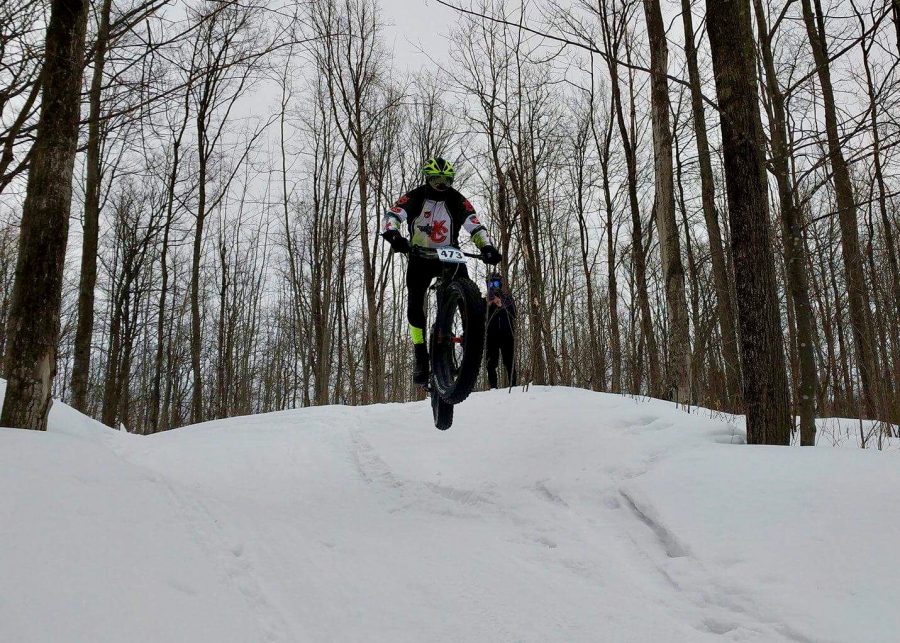 Photo Credit: Bryan Dew – Thanks for the photo!

While they were reviewing the timing, we all went back up to the top of Eh Line to record a video of everyone coming down. At the end, we opted for some more shenanigans and set up for some photos with fatbikes catching air. It was a good day and hope I can stick aroud for this again next year.

Jeff Wolf Photography – Check out the photos and videos

Contrast Coffee – Coffee before the ride hit the spot

Blackrocks Brewery – Beer after the ride hit the spot