The Loppet Duathlon was an unplanned event for me, but a fun one at that. My involvement was spurred on by Ben Mullin as a little end of snow season fun showdown where I stand no chance against Ben on skis, but have a little leg up on him with the bike. Mike Halverson was also in on the fun. Again, I have no chance against Mike on the skis, but a little leg up on the bike. Things played out accordingly, where I got my tail handed to me on the skis. I was able to make up some time on the bike… just enough to catch Mike right before the finish, but not nearly enough to catch Ben. 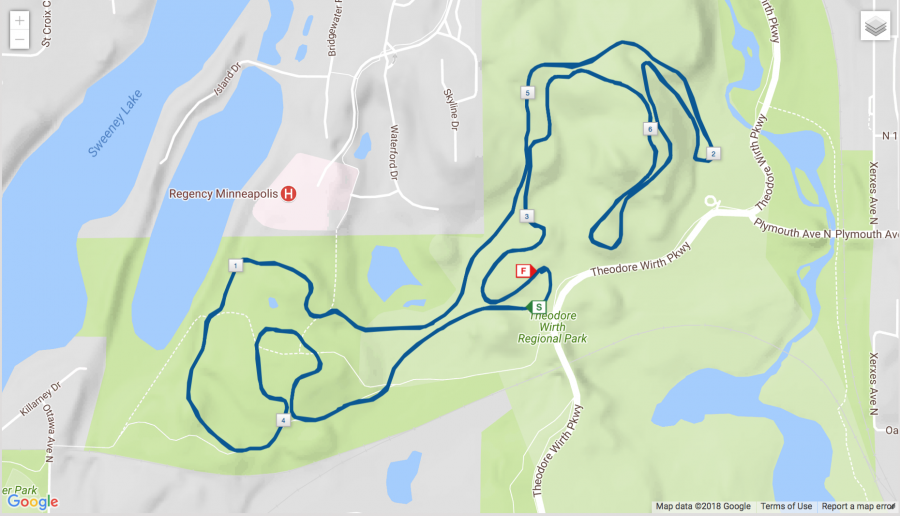 Total lap distance was less than 3.5 miles or close to 5.5k. I usually don’t get too geaked up about lap style races when it comes to mountain biking, but this was a fun course for both skiing and fatbiking and nice to see spectators around the course. With that, it was a nice course for spectators as well. The course itself wraps around a golf course.

The course was hilly and made you work. My elevation gain came out to just over 1200 feet over the 4 laps that totaled 13.2 miles.

I lined up at the back as I knew I had no business mixing it up at the front on skis and I was right. We took off and I was sketchy. The snow was icy and unpredictable. Plus, I can’t ski worth a darn anyways. We all started stretching out and I found myself in the last handful of people. Someone told me that small ski races are much different from small bike races… Saying that bike races tend to have folks of all abilities, but small ski races are typically made up of people who are good skiers and serious about it.

Anyway, I spent the entire ski segment near the back of the field. Through about half of it, I kept finding myself behind somebody that was overly cautious on the downhills but faster than me on the flats and about equal on the uphills. I couldn’t seem to get around them and found myself having to hit the brakes all the time on the downhills. If I could pull my technique together a bit more, I would have been in a whole lot better shape.

On the second lap of the ski, I actually had a biker pass me that was on their first lap already… I had actually been lapped. There might have been 2 bikers that passed me. By the time I finished my second lap and hit the transition zone to grab my bike; I think there were only a few bikes left in the transition zone.

I was going to start the bike segment in 30th place out of 33.

I jumped on the bike and got rolling… It was a bit weird going from ski to bike, but I was in my happy place and started my chase. I would pick out a rider in front of me and then chase them down, make the pass and then start chasing the next. I had a lot of ground to make up, but I was never going to chase back toward the front. The guys at the front that were good skiers, were also good bikers.

At some point, I think at the start of the second lap… I almost had a washout, which cause me to react with a twisting of my legs or something that fired up the leg cramps. I think I rode the rest of the second lap with my muscles locked up on my right leg from the knee down. I was still able to keep making up ground and kept reeling riders in.

At the end of it I think I ended up making back 10 spots, but almost lost a couple of them back at the finish. I had made a pass and didn’t realize these guys, 1 of them being Mike, had stayed on my wheel. I usually sprint for the finish regardless of whether I’m by myself or not and good thing I did or I would have lost both of those places right at the finish line.

I ended up finishing 21st out of 33 with my last lap on the bike being the 5th fastest lap time on the bikes.

Although part of me didn’t really want to go to this as I was running short on time… I am really glad I did and had a lot of fun with it. I probably should find some more stuff like this to do during the week that is low key and a fun workout. I’ll likely plan on this one for next year again if it happens. I thought it was a nice way to finish off the ski season.