The Woolly Bike Race has traditionally been the kick off event of the Minnesota Mountain Bike Series and draws a nice crowd of racers into the St. Croix River Valley. This was my first time racing the elite class for any type of XC series race.

My kids had a ball with the kid’s comp race. I rode out to the various trail sections to check on them and I could hear them giggling, laughing and chatting as they rode through the trails. That was their first time doing one of the kid’s comp races vs the free fun race. They are excited to do some more of them, so we’ll likely be at more of the Minnesota Series Races this year. 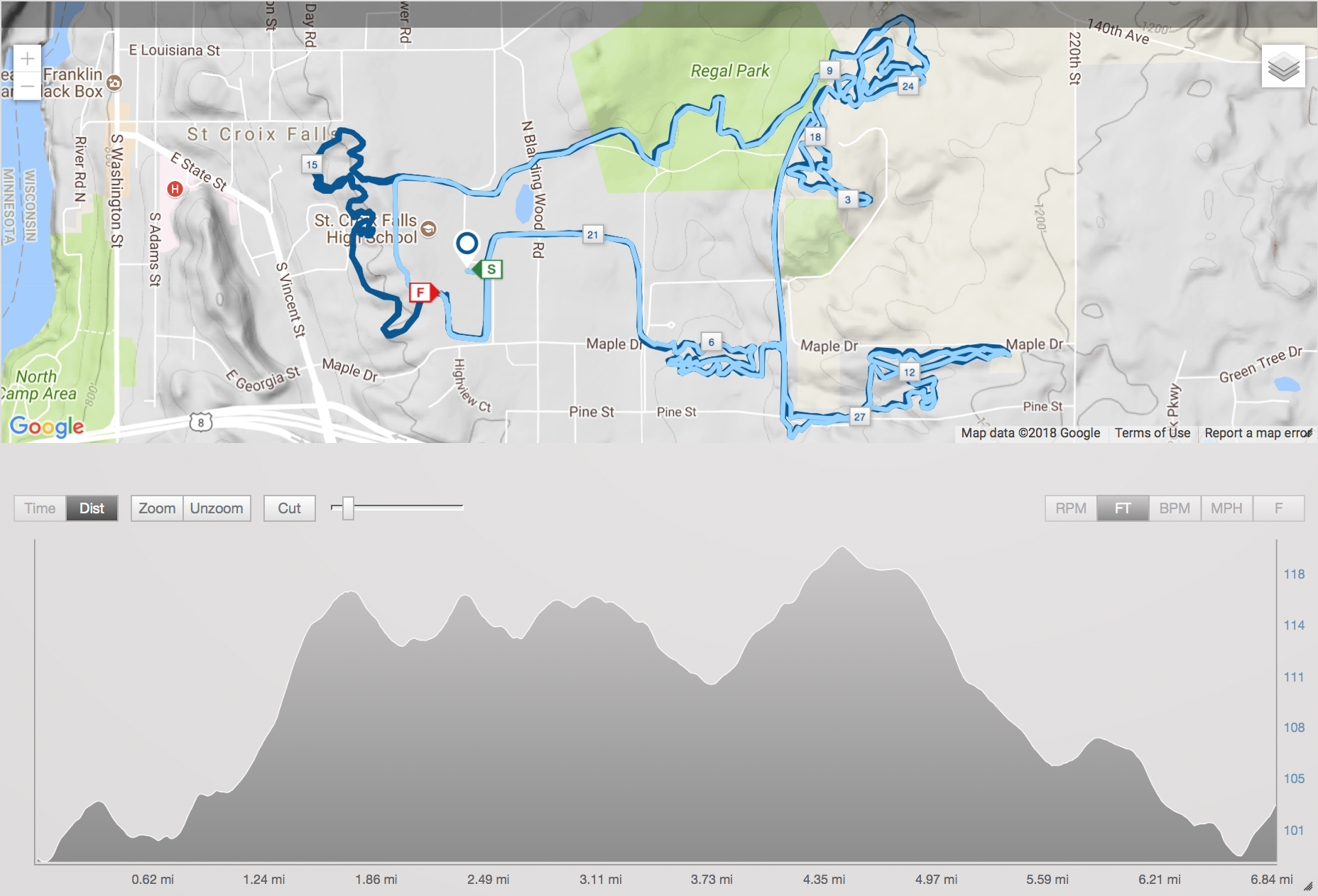 Lap 1 of the elite race and actually I think lap 1 of all races except the comp class skipped West Ridge on the first lap and just followed the tree line around the High School. The start of the elite race was crazy fast and I can’t imagine what would happen if we tried dumping into the woods right away. We were bottlenecked and rubbing wheels all the way around the school, over the road and into the first short section of singletrack that connects to the bike path as it was. Something I really wasn’t prepared for. 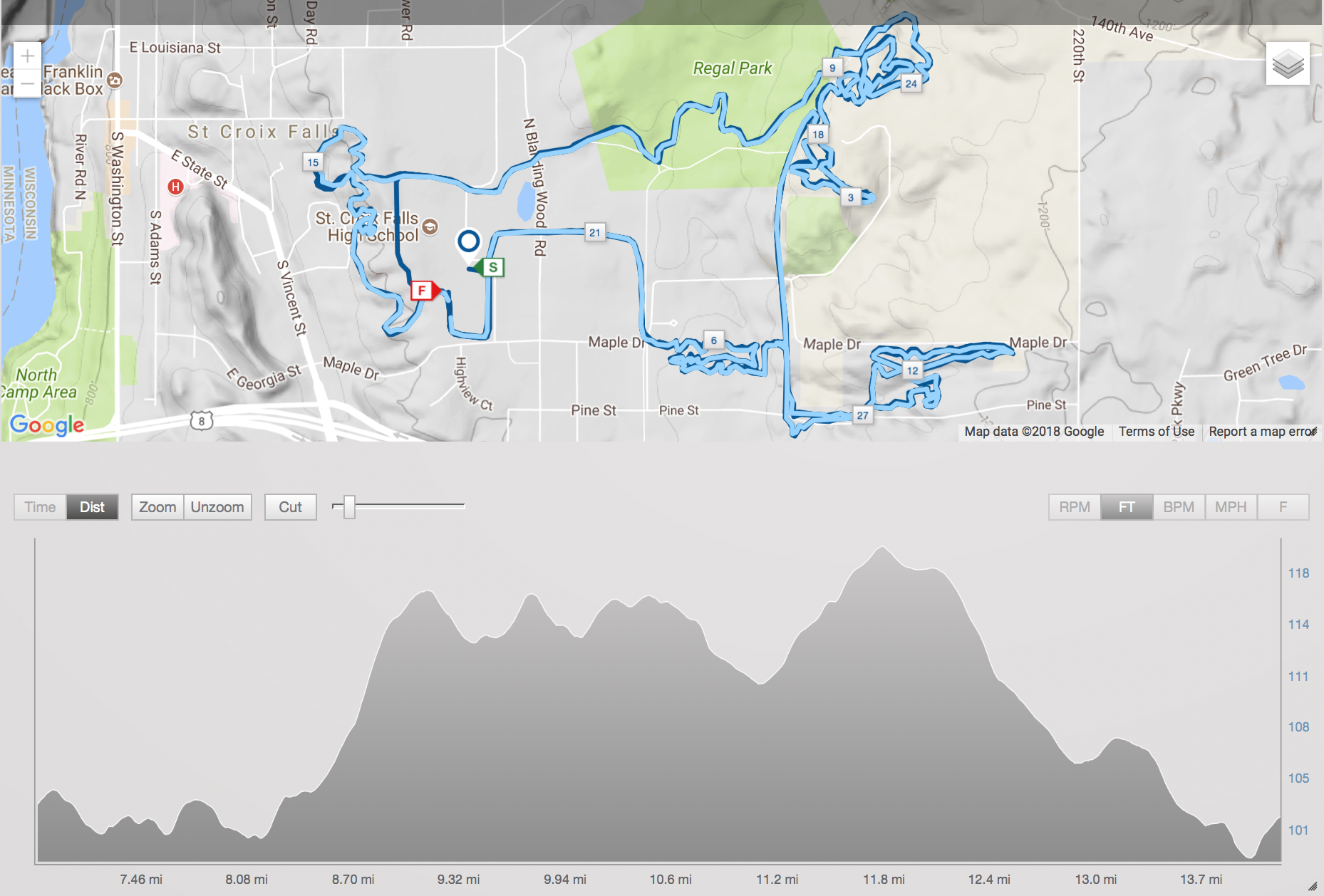 Lap 2 hit the full lap, so entering West Ridge was basically the start of lap 2.

We covered all of the trail system except for Riegel Park.

I’m riding a Trek ProCaliber 9.8SL this year. It’s pretty much stock except for a different stem and 15mm riser bars. I’m still playing around with some different fits on it and had just swapped out the bars and stem. I’m used to riding full suspension, but I really like the ProCaliber and am liking the simplicity of the hardtail. I’ve mentioned this to a few people, but the Woolly trails in particular might have just enough chatter in them, that I’m not sure if the hardtail is faster than full suspension or maybe it’s a wash. I love how the ProCaliber climbs and the IsoSpeed does help with some of the vibrations to the body if you’re in the saddle over some of the minor trail chatter vs other hardtails I’ve ridden.

I’m trying out some new things this year and went with 2 bottles of Scratch on the bike. I also taped 2 gels to my top tube for emergency. I should have just carried 1 bottle and took a hand up, but my wife was volunteering during the race and wasn’t guaranteed I’d be able to get a hand up. I did leave a 3rd bottle of Scratch with my wife just in case, which I ended up grabbing at the start of the 4th lap. I also took 1 of the gels, maybe 3rd lap or so. The Scratch seemed to digest well and didn’t load up my gut. I also didn’t feel like I was starved for fuel either, especially with throwing down the gel.

I lined up a few rows back, putting me closer to the back than the front. Even at that, the race was a really fast start and I wasn’t prepared for the aggressiveness of it. The elite race skips west ridge on the first lap and I can’t imagine what would happen if we actually tried to dump into west ridge. We had some bottle neck points just getting around the field and tree line behind the school. I ended up drifting back quite a few spots and did not get a real good start.

I knew at this point I had some work to do for a top 20 finish, which is what I told myself I would be fairly happy with, based on what I had seen of this field in the past. I did make up some ground when we got into the trails and reeled a few positions back. Based on sorting the lap splits from the results, I ended up coming through the first lap in 24th position.

I never really warmed up my legs other than about a mile total ride around the side streets before the start, so my legs were in a bit of a shock the entire first lap, but I was getting comfortable by the end of it.

I made up some ground early on lap 2 and picked off a couple spots in West Ridge and maybe another one out in Reigel Park. My legs were warmed up and I was feeling good now and seemed to get into a rhythm in the trail. I never could get in a train going down the Gandy Dancer and was always ripping it solo.

I would have people start to catch me on the Gandy, but I know the Erratic Rock climb well and could usually pull back away going up Erratic. I think lap 2 is when I set a bunch of PRs for the various Woolly trail segments set up in Strava.

The other thing that was happening in lap 2 is that the trail was just crumbling in some sections because it was so dry and it had been ridden so many times now with all the other races going on. It was crazy dusty and loose. Big Oak is one of those segments that is fairly flat, but with a lot of twisty tight turns. It was loose, slippery and unpredictable… but I still set a PR on my second lap through it.

I ended up coming through the 2nd lap in 21st place.

I got a little nervous in lap 3 when I had the hint of some leg cramps kick in. I hate that feeling… I don’t know exactly what my issues have been, but I’m guessing it has a lot to do with my diet. I also get myself dehydrated as I go through the day and realize I haven’t been drinking any water. I think I’m drinking too much coffee as well.

Anyway, I proceeded with caution through some of lap 3 as I was unsure where these leg cramps were going to go and lap 3 ended up being my slowest lap. According to the lap splits, I got passed somewhere during lap 3, but I really can’t remember where that would have been.

I remember getting caught on the Gandy by a guy right at the entrance of Erratic Rock, where he made the pass. We didn’t even get to the first left hand turn and I was on his wheel. I gave him a chance after the turn and then asked to pass and he didn’t move. We got to the flat and started up the next loose section and I needed to get around him and found a place to pass. I never saw him again by the time I got to the top of the Erratic Rock Climb.

I came through lap 3 in 22nd place and was feeling good to head into the last lap.

I rode a strong 4th lap and was able to reel back a few positions throughout the course. The course itself was getting crazy loose. I’ve never seen it that dry and dusty. Some of the off camber spots were just falling apart they were so dry and loose. You really had to be careful in some of the corners.

Anyway, it felt good to have the legs to stay in it at that pace for another lap and then reel a few people in on the last lap vs being depleted and falling back in positions. I was tired, my legs were going in and out of some cramps, but I was able to regulate my effort enough without dialing back to much and kept the cramps at bay. After the race, they never came back again either.

I ended up coming through the finish in 19th place out of 39 with a time of 2 hrs and 17 mins and a little over 13 minutes behind the winner Jeff Hall and just over 7 minutes from the 3rd place podium spot.

I’m still trying to register in my brain how and where I could ever pick up 3+ minutes per lap, which is how much faster Jeff Hall was per lap. That is a ton of time and hats off to Jeff for what he does out there. He actually had a 2 minute lead over 2nd place Brendan Bellew, who had a 3 and half minute lead over 3rd place Samuel Berkland. This put me over 7 minutes away from any podium spot.

I think I might do more of these races this year. I think it will be good for me and since they are on Sundays… it is likely going to be the easiest racing for me to fit in this year as it is a little easier for me to be out of the shop on Sundays. It was nice to do some racing again.